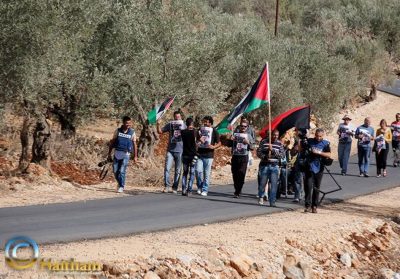 Many Palestinian, Israeli, and international peace activists held, Friday, the weekly nonviolent protest against the illegal Israeli Annexation Wall and colonies, in Bil’in village, near the central West Bank city of Ramallah.

The protest was held by approximately twenty Palestinians, ten Israelis and five international peace activists, who marched from the center of the village carrying Palestinian flags and chanting against the ongoing Israeli occupation, the illegal Annexation Wall, and the colonies, in addition to the constant violations against the Palestinians, their homes, and lands.

At least 50 Israeli soldiers were deployed in the area, and threatened to use excessive force against the protesters if they do not leave; the protest later ended without any clashes, injuries, or abductions.

The soldiers detained local activist, Hamza Burnat, for nearly an hour before releasing him.

Nonviolent activist Ashraf Abu Rahma told the IMEMC that the soldiers used megaphones calling his name and the name of Abdullah Abu Rahma, the coordinator of the Popular Committee against the Wall and Colonies in Bil’in, threatening to abduct and imprison them, should they continue to participate in protests.

Ashraf told the IMEMC that the army keeps threatening them of arrest and very high fines, under various false allegations and claims.

He stated that Abdullah has a court session in about a month, after he was recently released on a 14.000 Shekels bail.

Both Ashraf and Abdullah are under constant threat of arrest, and high fines, if the soldiers detain them during protests.

“They make up charges, and create their own laws,” Ashraf stated, “They declare the Palestinian lands and orchards as closed military zones, to prevent us from entering them, and arrest us if we do, or if we do not leave the area.”

Abu Rahma also stated that the protesters marched in solidarity with detainee Salah Khawaja, 54, of the Palestinian National initiative, from Ni’lin nearby village, who was recently abducted, and was interrogated more than 40 times, and remains denied legal representation and family visits.

He also called for supporting the Boycott, Divestment, and Sanctions (BDS) movement, and for a larger solidarity with it around the world, especially as the army is deliberately targeting BDS activists in Ramallah, and various parts of the West Bank, in addition the violations against Israeli and International BDS activists.