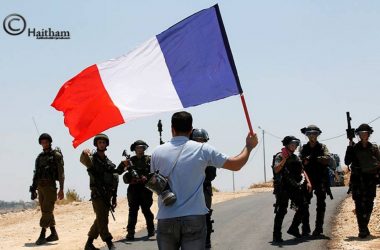 Approximately 20 international and Israeli peace activists and nearly 50 Palestinians held, Friday, the weekly nonviolent protest against the Israeli Annexation Wall and colonies in Bil’in village. near the central West Bank.

Palestinian Legislator Jamil Majdalani of the Popular Struggle Front, and many members of the front, also participated in the procession.

The protesters marched from the center of Bil’in, near the village’s mosque, and headed towards the Palestinian orchards, while Israeli soldiers were extensively deployed at the main entrance of the village, and its orchards.

He added that it seems that the soldiers are collecting videos and pictures of the local activists apparently to kidnap them later, or to gather more information about the protesters, Palestinian reporters and the figures of the ongoing protests.

Abu Rahma added that one of the soldiers told him the area is a “closed military zone,” a claim the army uses to ‘justify’ the closure and siege on entire villages and towns, in the occupied West Bank.

The Popular Committee in Bil’in said that today’s protest came to denounce terrorism all over the world, and that the protesters marched carrying Palestinian and French flags, while calling for ending terrorism and oppression in every part of the world.

Cameraman Haitham Khatib from Bil’in said the soldiers blocked the village road to end the procession, especially to prevent the protesters from reaching the Palestinian orchards.

Khatib added that, although some youngsters hurled stones on the soldiers who surrounded their village, the protesters, and the Popular Committee always march nonviolently and do not seek any confrontation with the military.

“We continue to protest the brutal illegal Israeli occupation, today a few youths threw stones at the soldiers after the procession ended… we do not encourage this,” Khatib said, “But we also cannot stop them from expressing their outrage against the imposing and threatening Israeli army soldiers, who repeatedly invade on our lands,  village, and homes!”

“This occupation seeks to destroy our lives. Israel has been terrorizing Palestinians for 68 years!” he added, “This is our home, our land; we belong here and united we will remain!”