Palestinians Living in Caves as Homes are Destroyed by Israeli Forces 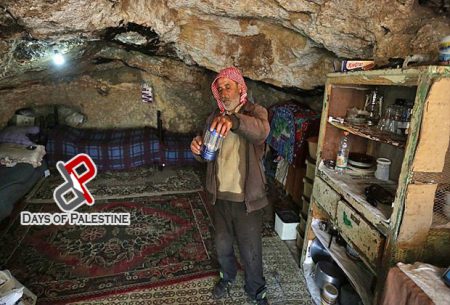 In this story, the writer describes the misery of the life of the Palestinians whose homes were razed by the Israeli occupation, and turned to live in caves.

Majid Hanani, a 64-year-old Palestinian, has been forced to live the life of a caveman after his home in the West Bank was leveled by bulldozers.

Located in the village of Tana east of the West Bank city of Nablus, Hanani’s home — along with 300 other modest Palestinian homes — was taken by Israeli bulldozers early this year, prompting displaced residents to seek refuge inside nearby caves.

The Israeli authorities, for their part, attempted to justify the demolitions by saying that the homes had been built without state permission.

“Life is difficult in the caves,” Hanani told Anadolu Agency, according to Days of Palestine. “We lack most basic requirements.”

“But, we have no alternative,” he said bitterly. “We build our homes out of corrugated iron and Israeli bulldozers eventually come and demolish them.”

While watching an old television set powered by solar energy, Hanani said: “I fear difficult days ahead; harassment by the Israeli army — and the Jewish settlers — will continue.”

He pointed to an outpost on a nearby hilltop, saying: “That’s a [Jewish] settler who came several years ago with his caravan. Today, he runs a farm for breeding cattle.”

“He established a settlement outpost there,” he explained. “Now he wants to extend the boundaries of his property to include land on which we were living before the 1967 occupation.”

Since the beginning of 2017, Israeli authorities approved the construction of more than 7,250 new Jewish-only housing units in occupied East Jerusalem and the West Bank, according to official figures.

Hanani owns some 200 sheep and lives off the money he makes selling the milk they produce and the cheese his wife makes.

Describing the cave in which he and his wife now live as “our modest kingdom”, Hanani said: “It’s a simple life. We only want to live in safety and security.”

Their cave contains two small beds, a television set perched on a rickety table, and a simple cooking oven.

“Due to the frequency of Israel’s home demolitions, we expect to spend most of our lives here,” he said.

In another cave located nearby, Fursan Hasan, 59, lives with his family under similar conditions.

Speaking to Anadolu Agency, Hasan explained: “We’ve lived in Tana village all of our lives; just as our parents and grandparents did.”

“But, Israel wants to expel us from the area, take control of the land and hand it over to settlers,” he said.

“We don’t pose a threat to anyone here,” Hasan said. “We live a simple life, breeding our sheep and living off the milk and cheese that we make.”

“But, from time to time, the bulldozers come and destroy everything, forcing us to intermittently to seek refuge in the caves,” he lamented.

Outside Hasan’s cave, his children play with the sheep.

One of them, seven-year-old Sabrin, explains: “The Israeli army tore down our school, as they did our home.”

The village’s only school has been demolished three times — most recently, last year — by Israeli bulldozers.

The Oslo II agreement — signed between Israel and the Palestinian Authority in 1993 — divided the occupied West Bank into areas A, B and C.

Under the terms of the agreement, Israel prohibits Palestinians from carrying out construction activity in Area C and demolishes any Palestinian structures built therein.

Area C, which accounts for more than 60 percent of the West Bank’s total territory, is controlled by an Israeli security and Israeli administration, the consent of which is required for all Palestinian construction in the area, according to the Oslo agreement.

This consent is rarely — if ever — granted.

Roughly 500,000 Israeli settlers now live on more than 100 settlements built throughout the West Bank and East Jerusalem since Israel occupied the territories in 1967.

International law, meanwhile, views the West Bank and East Jerusalem as “occupied territories” and considers all Israeli settlement-building on the land as illegal.

The Palestinians, for their part, want these areas — along with the Gaza Strip — for the establishment of a future Palestinian state.

Yet, despite their grim circumstances, the Palestinian cave-dwellers remain defiant.

“We won’t ever surrender,” Hasan said. “If they demolish our homes, we will just keep rebuilding them.”