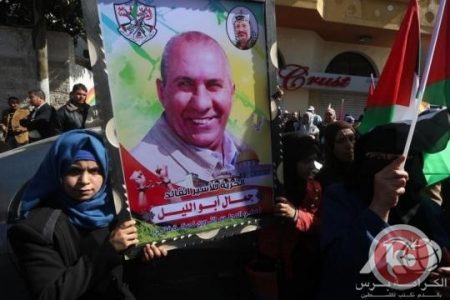 Activists marched from Qalandiya refugee camp to al-Manara square in the center of Ramallah in the occupied West Bank, on Sunday, to express solidarity with resident of the refugee camp Jamal Abu al-Leil, who has been on hunger strike for 17 days in protest of being held by Israel without charge or trial for more than a year.

The Palestinian Committee of Prisoners’ Affairs said, Thursday, that Abu al-Leil was being held in a tight cell in Israel’s Ashkelon prison, “lacking the simplest necessities of life, emptied of electrical appliances, covers, and extra clothes leaving Abu al-Leil with nothing but the clothes he is wearing.”

Abu al-Leil has been suffering from severe head and stomachaches, dizziness and difficulties walking, as he continues only to consume water, refusing all vitamins and supplements.

Saturday’s action started with a vehicle convoy on the main street that connects Jerusalem to Ramallah and the southern West Bank. After that, hundreds of activists marched from a tent outside Abu al-Leil’s house to Ramallah, with demonstrators waving Palestinian flags and flags of the Fateh movement.

After the march, activists returned to Qalandiya refugee camp and marched from there to the Israeli military checkpoint at the entrance to the camp, where they clashed with Israeli soldiers.

No injuries were reported. An Israeli army spokesperson told Ma’an News Agency that they were “not familiar” with the incident.

The rally, attended by leaders of the Fateh movement and other Palestinian factions, came after members of Fateh urged Palestinians to partake in a series of activities in support of Abu al-Leil.

Abu al-Leil is a former member of Fateh’s revolutionary council, while Mteir is head of the Qalandiya refugee camp youth center. Both had been previously detained by Israel several times.

Mteir has since ended his hunger strike after going 12 days without food, after reaching an agreement to be released in April 2017 without his administrative detention being renewed.

However, al-Qeeq was redetained in mid-January, and Israeli authorities have continued to hold al-Qiq without presenting any evidence or charges against him.

A group of protesters staged a sit-in, on Thursday, in solidarity with hunger-striking Palestinian prisoners, while activists closed the Jerusalem-Ramallah road for four days in a row, in protest of the Palestinian Authority’s perceived inaction with regard to the cases of Abu al-Leil and Mteir.

While Israeli authorities claim the withholding of evidence during administrative detention, which allows detention for three- to six-month renewable intervals, is essential for state security concerns, rights groups have instead claimed that the policy allows Israeli authorities to hold Palestinians for an indefinite period of time without showing any evidence that could justify their detentions.