Palestinians Protest Policies of Occupation in Front of Knesset 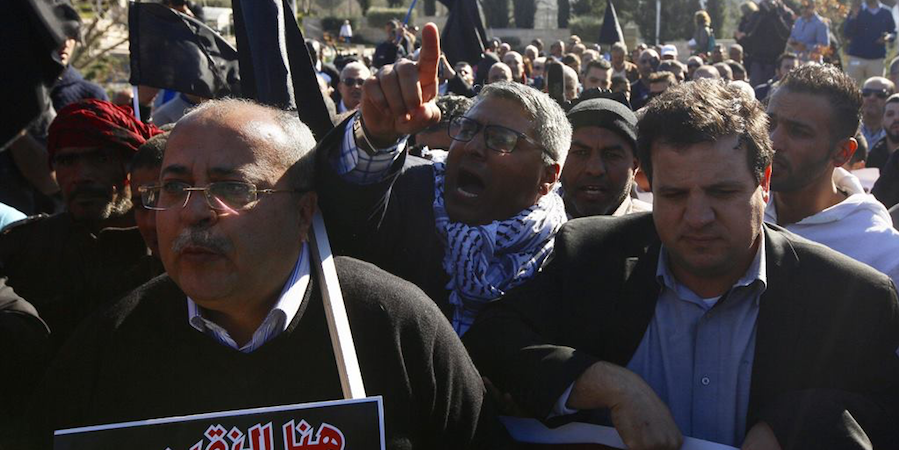 Hundreds of Palestinians respond to house demolitions, extrajudicial executions, and the confiscation of Palestinian corpuses with peaceful protest.

On Monday, hundreds of Palestinians gathered outside of the Israeli parliament, also known as the Knesset.

Protestors outside held signs reading, “This is the Naqab, This is Umm al-Hiran.” Other signs, written in both Arabic and Hebrew, called on Israeli politicians to “free the body of the teacher Yaqoub Abu al-Qiyan and oust inciter [Israeli Minister of Public Security] Gilad Erdan.” Black flags were also held high.

The High Follow-Up Committee for Arab Citizens of Israel organized the demonstration in response to egregious Israeli violations of Palestinian rights inside territories conquered by the Jewish state in 1948.

Mohammad Baraka, chairperson of the High Follow-Up Committee for Arab Citizens of Israel, said the protest is a message to Israeli leaders that the Palestinian community in Israel will not stand idle as crimes are perpetrated against them.

Earlier this month, Israeli forces demolished 11 Palestinian homes in Qalansuwa, a Palestinian town in present-day Israel. Many other villages under Israeli rule face an influx of demolition orders.

After al-Qiyan’s death, Israeli forces accused him of attempting to run over police officers. Government authorities then confiscated his corpse as per recently passed government policy. Video and autopsy evidence, however, support eyewitness accounts indicating that al-Qiyan’s death was an extrajudicial execution and not an attack against the officers.

The Israeli High Court ruled that the police should return al-Qiyan’s body, on Sunday. His funeral is expected to commence on Tuesday, in Hura village.

Palestinian citizens of Israel have launched multiple demonstrations against Israeli human rights abuses, this month, and more are to come.