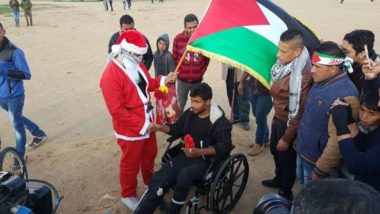 On Friday evening, 21 December 2018, Israeli forces Killed 3 Palestinian civilians, including a child and a person with a mobility impairment, and wounded 115 other civilians, including 21 children, 2 women, 2 journalists and 3 paramedics, in the peaceful demonstrations in the eastern Gaza Strip despite the decreasing intensity of the demonstrations there for the eighth week consecutively and absence of most means usually used during the demonstrations since the beginning of the Return and Breaking the Siege March 8 months ago.

According to observations by PCHR’s fieldworkers, for the eighth week since the beginning of the Return March on 30 March 2018, burning tires and stone-throwing decreased while the attempts to cross the border fence and throw incendiary balloons were completely absent.

Though the demonstrators were around tens of meters away from the border fence, the Israeli forces who stationed in prone positions and in military jeeps along the fence continued to use excessive force against the demonstrators by opening fire and firing teargas canisters at them, without the latter posing any imminent threat or danger to the life of soldiers. 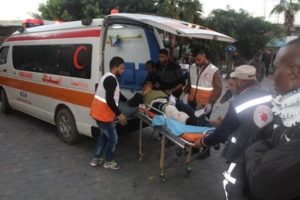 At approximately 14:30, thousands of civilians, including women, children and entire families, started swarming to the five encampments established by the Supreme National Authority of Great March of Return and Breaking the Siege adjacent to the border fence with Israel in eastern Gaza Strip cities.

Hundreds, including children and women, approached the border fence with Israel in front of each encampment and gathered tens of meters away from the main border fence, attempting to throw stones at the Israeli forces.

Although the demonstrators gathered in areas open to the Israeli snipers stationed on the top of the sand berms and military watchtowers and inside and behind the military jeeps, the Israeli forces fired live and rubber bullets in addition to a barrage of teargas canisters. The Israeli shooting, which continued at around 17:00, resulted in the killing of 3 civilians, including a child and a person with a mobility impairment.

Those Killed were identified as:

Moreover, 115 civilians, including 21 child, 2 women, 2 journalists and 3 paramedics, were wounded. In addition, hundreds suffered tear gas inhalation and seizures due to tear gas canisters that were fired by the Israeli forces from the military jeeps and rifles in the eastern Gaza Strip.

PCHR emphasizes that continuously targeting civilians, who exercise their right to peaceful assembly or while carrying out their humanitarian duty, is a serious violation of the rules of international law, international humanitarian law, the ICC Rome Statute and Fourth Geneva Convention. Thus, PCHR calls upon the ICC Prosecutor to open an official investigation into these crimes and to prosecute and hold accountable all those applying or involved in issuing orders within the Israeli Forces at the security and political echelons.