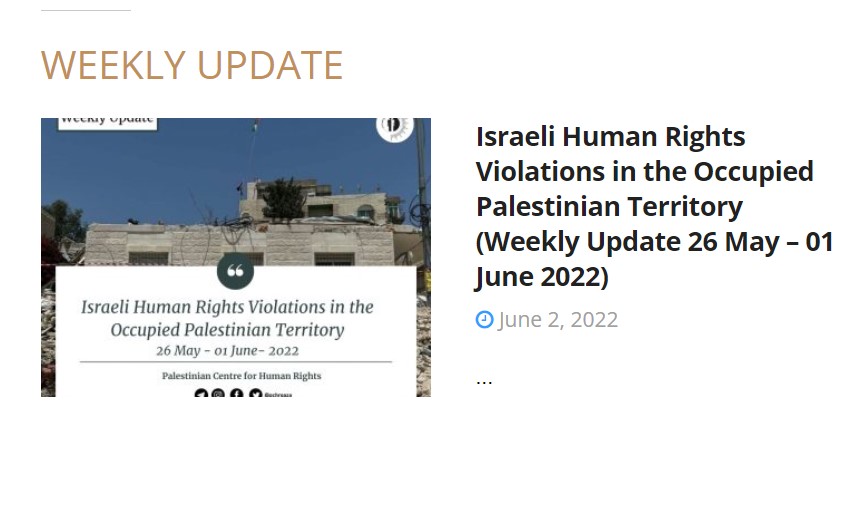 Violation of the right to life and bodily integrity

Three Palestinians, including a woman and a child, were killed and 129 others, including 10 children, were injured by Israeli Occupation Forces (IOF) fire while dozens of others suffocated and sustained bruises in IOF attacks in the West Bank, including occupied East Jerusalem.  Details are listed below:

On 27 May 2022, Zaid Ghneim (14) was killed in Al-Khader village, southern Bethlehem, after IOF deliberately and unjustifiably opened fire at him in their incursion into Um Rukbah area in the village and deployment between houses. (More information is available here)

On 01 June 2022, Belal ‘Awad Qobha (24) was killed, and 4 others were injured in clashes during IOF incursion into Ya’bad village in Jenin.  The incursion ended by exploding the family house of Diaa Hamarsha, who was previously killed after carrying out a shooting attack that killed 5 Israelis in Tel Aviv on 29 March 2022.

On 01 June 2022, Ghofran Warasna (30) was killed with a bullet shot by IOF at the entrance to al-‘Arroub refugee camp in Hebron, allegedly for attempting to carry out a stabbing attack.  (Further information available here)

Those injured were victims of IOF’s excessive use of force and suppression of peaceful protests and gatherings organized by Palestinian civilians and they were as follows:

On 26 May 2022, a child was wounded with a bullet in clashes that accompanied IOF’s incursion into Huwwara village, southeastern Nablus.

On 27 May 2022, 4 Palestinians, including a child, were wounded with rubber bullets during IOF’s suppression of Kafr Qaddoum weekly peaceful protest in Qalqilya.

On 28 May 2022, 4 Palestinians, including 4 children, were wounded with rubber bullets during IOF’s suppression of Kafr Qaddoum weekly peaceful protest in Qalqilya.

On 29 May 2022, IOF conducted extensive assaults during their incursion into al-Aqsa yard in East Jerusalem in the morning.  They beat up elderlies, causing them fractures, during IOF’s attempt to empty the yard in order to secure the raid of more than 2600 settlers.

IOF also arrested 10 worshippers when they were near al-Silsilah Gate and obstructed the work of journalists, forcing them to leave the mosque yards.

In the evening, 79 Palestinians were wounded, and 50 others were arrested when IOF suppressed with sound bombs, teargas canisters and rubber bullets tens of Palestinians participating in a peaceful protest and raising Palestinian flags.

The protest coincided with a rally of hundreds of settlers in the Damascus Gate yard as part of their annual flag march where they chanted racist slogans and conducted many assaults under the protection of IOF who closed the entire area.  Also, clashes broke out between Palestinians and IOF and settlers that extended to East Jerusalem’s neighborhoods and villages.

During the incursion, IOF raided a house, assaulted the residents, and destroyed the internal walls, causing severe damage to the house.  Moreover, 3 Palestinians, including a child, were wounded with live and rubber bullets in clashes with IOF at the entrance to al-‘Aroub refugee camp, northern Hebron.

On 31 May 2022, 2 Palestinians were wounded in clashes with IOF at the northern entrance to ‘Azzoun village, eastern Qalqilya.

In the Gaza Strip, IOF opened fire 6 times at agricultural lands in an access restricted area in the eastern Gaza Strip. Also, five IOF shootings were reported on fishing boats off the western shore.

”So far in 2022, IOF attacks killed 53 Palestinians, including 42 civilians: 12 children, 5 women (one was a journalist) and the rest were activists; 3 of them were assassinated. Also, 841 others were wounded in these attacks, including 84 children, 4 women, and 19 journalists all in the West Bank, except for 9 fishermen in the Gaza Strip.

On 01 June 2022, IOF demolished a house in al-Isawiya village in East Jerusalem, for the sixth time in a row under the pretext of unlicensed construction, rendering a family of 8 persons, including 4 women and 2 children, homeless.

On the same day, IOF demolished 9 residential tents and a sheep barn in the Masafer Yatta area in Hebron, displacing 9 families of 60 persons, including 23 children.  IOF also demolished a residential barrack, and another used as a sheep barn in addition to 4 fences in Za’im village, northern East Jerusalem, under the pretext of unlicensed construction, displacing a family of 5, including 3 children.  Moreover, IOF handed 10 cease-construction notices to facilities in Marda village, northern Salfit.

”Since the beginning of 2022, IOF rendered 76 families homeless, a total of 441 persons, including 89 women and 208 children. This was the outcome of IOF demolition of 73 houses and 16 residential tents. IOF also demolished 47 other civilian objects, leveled 246 dunums and delivered 96 notices of demolition, cease-construction, and evacuation.

Settlers conducted 7 attacks against Palestinian civilians and their property in the West Bank.  The attacks included setting fire to agricultural lands and attacking vehicles, houses, and journalists. Details are as follows:

On 27 May 2022, settlers organized a flag rally in Huwwara village in Nablus and attacked and damaged a coffee shop on the main street in the village.

On 28 May 2022, settlers conducted attacks on Palestinians during a flag rally organized by the former under IOF’s heavy protection.  The rally took off from the Damascus gate area towards the streets of Eat Jerusalem’s Old City On the eve of the anniversary of the occupation of the city.  IOF violently assaulted 2 Palestinian children and then arrested them.

On 29 May 2022, in a flag rally in East Jerusalem, settlers conducted assaults against Palestinians in the Damascus Gate and several neighborhoods in East Jerusalem.  Settlers assaulted by hands and insulted journalists in the area, wounding a number of them.  The settlers also tried to raid houses in Sheikh Jarrah neighborhood and attacked property as well as breaking car windows.

On 30 May 2022, settlers set fire to agricultural lands in the outskirts of Madama and Burin villages in Nablus as 50 olive trees were burnt.

On 31 May 2022, settlers assaulted Palestinians in the Wadi Rababa neighborhood in East Jerusalem coinciding with an Israel Nature Authority’s razing operation in the area.  Settlers also threw stones at a vehicle and broke its windows in addition to attacking the passengers and causing them bruises and wounds.

”So far this year, settlers carried out 140 attacks on Palestinians and their properties in the West Bank.

IOF carried out 212 incursions into the West Bank, including occupied East Jerusalem. Those incursions included raids and searches of civilian houses and facilities and the establishment of checkpoints.

During those incursions, 117 Palestinians, including 11 children and a journalist, were arrested; most of them were arrested during IOF’s incursion into al-Aqsa Mosque yards and suppression that coincided with the Israeli flag march in East Jerusalem. Moreover, IOF arrested 10 Palestinians in the Gaza Strip, including 2 infiltrators via eastern Rafah on 26 May and 8 fishermen while sailing off Rafah shore on 31 May.  Six of the fishermen were released the next day (further details are available here).

Meanwhile, the Israeli occupation maintains its illegal and inhuman 15-year closure on the Gaza Strip. Details are available in PCHR’s monthly update on the Gaza crossings.

In the West Bank, including occupied East Jerusalem, IOF continues to impose restrictions on the freedom of movement. On top of its 108 permanent checkpoints, IOF established 108 temporary military checkpoints and arrested 3 Palestinians at those checkpoints.

”So far in 2022, IOF established 1709 temporary military checkpoints and arrested 101 Palestinians at those checkpoints