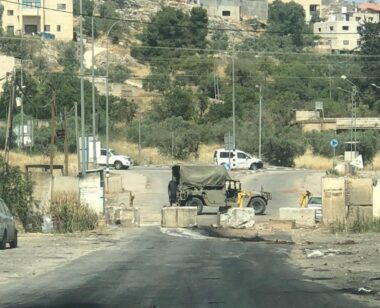 On Thursday, The Israeli army continued the closure of Beita junction, south of the northern West Bank city of Nablus, for the seventh day, inflicting hardships on more than 15.000 Palestinians, including farmers, merchants, and students.

Mahmoud Barham, the Mayor of Beita, said the closure of this main junction affects the lives of at least 15.000 Palestinians, especially since it obstructs the transfer of fruits and vegetables to the central market in the town.

Barham added that the market is essential because it is a distribution hub of fruits and vegetables to markets in the northern and central parts of the occupied West Bank, an issue that is causing serious losses to the farmers.

The closure also obstructs the movement of students, workers, and employees as the junction leads to many surrounding areas and governorates.

Barham called on the International Community to intervene and end the escalating Israeli violations and severe restrictions on the freedom of movement of dozens of thousands of Palestinians in the area.

It is worth mentioning that the army closed the junction last Friday following protests in the area, especially after illegal Israeli colonizers attacked Palestinian homes and lands.

The Israeli army also fired many gas bombs and concussion grenades, causing fires in farmlands and around many homes before the Palestinians managed to extinguish them.