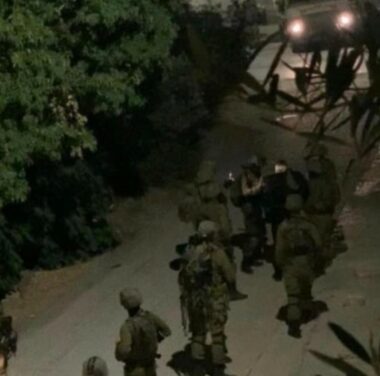 On Thursday dawn, Israeli soldiers abducted at least ten Palestinians from their homes in several parts of the occupied West Bank.

In Ramallah, in the central West Bank, the soldiers abducted Ayed Fadel Hajeer, 22, from Deir Ibzi’ village, west of the city.

In the Al-Khader town, south of Bethlehem, the soldiers invaded and searched homes before abducting a former political prisoner, Ali Mustafa Salah, 24.

In Nablus, in the northern West Bank, the soldiers invaded Huwwara town, south of the city, searched several homes, and abducted Walid Odah.

Furthermore, the soldiers abducted Mohammad Issa Darabi’, and former political prisoner Hasan Damhan, from their homes in Doura city, south of Hebron, in the southern part of the occupied West Bank.

Many army jeeps also invaded Tammoun town, south of Tubas, in the northeastern West Bank, and searched many homes.

In Jenin, in the northern West Bank, the soldiers stormed and searched homes and abducted a young man, Mohammad Turkman.

The soldiers also abducted Ahmad Hasan Hamarsha, the father of slain Palestinian Dia’ Hamarsha, after detonating the family home in Ya’bad town, southwest of Jenin, in an illegal act of collective punishment.

Shortly after the army invaded the town to demolish the home, the soldiers killed a young man, Bilal Awad Kabaha, 24, and injured six others, including three who suffered serious wounds.