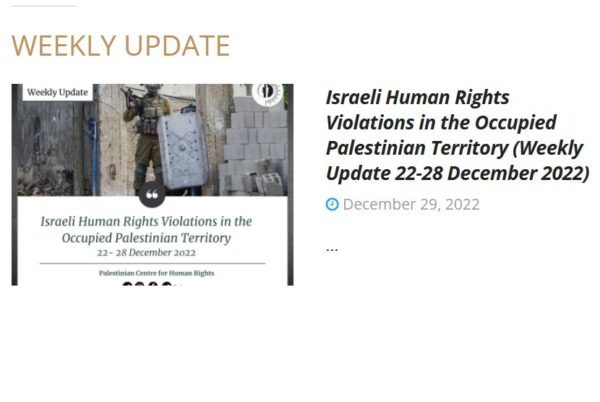 A Palestinian civilian was killed, and 18 others, including a child and a journalist, were injured, while dozens of others suffocated in Israeli Occupation Forces (IOF) attacks in the West Bank, including occupied East Jerusalem.

On 22 December 2022, IOF killed Ahmed Daraghmah (23) and wounded 5 other Palestinians, including a child, during IOF’s incursion into Nablus. (Details available in PCHR’s press release.)

Meanwhile, those injured were victims of IOF excessive use of force and shooting that accompanied their incursion into the Palestinian cities and villages, or IOF suppression of peaceful protests organized by Palestinian civilians, and they were as follows:

On 23 December 2022, six Palestinians were injured: four with rubber-coated bullets and two, including a journalist, directly hit with teargas canisters during IOF’s suppression of Kafr Qaddoum weekly protest in northern Qalqilya.

On 26 December 2022, a Palestinian sustained fractures in his chest after IOF assaulted him and his family, including one with a disability, during IOF’s raid into their house in Husan village, west of Bethlehem.

On 27 December 2022, three Palestinians were wounded: one with a rubber-coated bullet and the other two with teargas canister shrapnel, during IOF’s suppression of a protest organized at Qalandia checkpoint, north of occupied East Jerusalem.

On the same day, a Palestinian was wounded with a rubber-coated bullet during clashes with IOF in the Al-Arroub refugee camp, north of Hebron.

On 28 December 2022, a Palestinian was shot with a rubber-coated bullet in his foot in clashes with IOF during the latter’s incursion into the Deheisheh refugee camp in Bethlehem. Before their withdrawal, IOF arrested a Palestinian.

On the same day, a Palestinian was wounded with a live bullet in his chest in clashes with IOF during the latter’s incursion into Beit Ummar village, north of Hebron.

In the Gaza Strip, nine shootings were reported on agricultural lands in eastern Khan Yuni.  A bullet penetrated a house wall in one of those shootings, but no casualties were reported.

IOF demolished the ceiling of an abandoned house and 5 civilian facilities and confiscated two vehicles in the West Bank, including East Jerusalem. Details are as follows:

On 22 December 2022, IOF demolished a 250-square-meter barrack used as an auto paint shop in Deir Sharaf village, west of Nablus, under the pretext of illegal construction in Area C. On the same day, IOF confiscated a 12-square-meter mobile caravan in northern Hebron.

On 23 December 2022, IOF confiscated a tractor in eastern Yatta city and a JCB excavator in Masafer Yatta, south of Hebron.

On 26 December 2022, IOF demolished the ceiling of a 140 sqm (square meter) abandoned house in al-Khader village, southwest of Bethlehem, under the pretext of unlicensed construction.

On the same day, IOF demolished a room, a water well, a fence, and the foundations of an auto repair shop (1000 sqm) in Qalqas village, south of Hebron.

On the same day, IOF demolished an industrial facility in Immatain village, north of Qalqilya, under the pretext of construction in Area C.

”Since the beginning of 2022, Israeli occupation forces made 140 families homeless, a total of 823 persons, including 162 women and 373 children. This was the outcome of IOF demolition of 164 houses and dozens of residential and agricultural tents. IOF also demolished 123 other civilian objects, leveled vacant areas of land and delivered dozens of notices of demolition, cease-construction, and evacuation.

On 27 December 2022, under IOF backup, Israeli settlers from the El’ad and Ateret Cohanim organizations, seized a 5000-sqm plot of land known as al-Hamra land, which is owned by the Greek Orthodox Monastery and rented by Samareen family in Silwan village in occupied East Jerusalem. This coincided with IOF’s raids into Samareen family houses and assaults on six Palestinians, including 2 children, before arresting them by IOF.

”Since the beginning of the year, settlers conducted at least 259 attacks. In two of the attacks, 2 Palestinians were killed.

IOF carried out 163 incursions into the West Bank, including occupied East Jerusalem. Those incursions included raids and searches of civilian houses and facilities and the establishment of checkpoints.

During those incursions, 91 Palestinians were arrested, including 10 children. In the Gaza Strip, on 22 December 2022, the Palestinian General Authority for Civil Affairs (GACA) was informed that a Palestinian, from Khan Yunis, was arrested while traveling via Beit Hanoun (Erez) crossing a day before, despite having a businessman permit.

Israeli occupation maintains its illegal and inhuman 15-year closure on the Gaza Strip. Details are available in PCHR’s monthly-update in the Gaza crossings.

During this week, IOF reclosed the military checkpoint (300), which separates Bethlehem from Jerusalem, several times to the vehicles and later reopened it later, while maintaining the pedestrian lane open. Also, IOF closed Qalandia checkpoint in northern East Jerusalem for few hours many times before reopening it later, blocking traffic.

”So far in 2022, IOF established at least 4594 temporary military checkpoints and arrested 202 Palestinians at those checkpoints