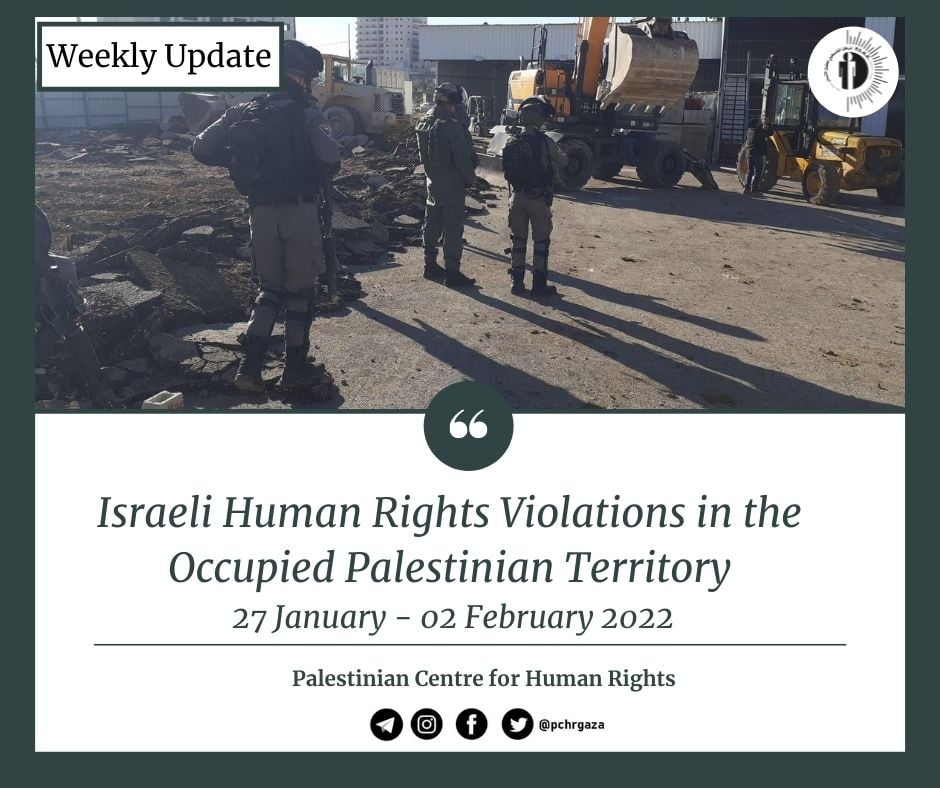 In the West Bank, attacks by the Israeli occupation forces (IOF) rendered 7 Palestinians wounded, including 3 children.

In the Gaza Strip, IOF opened fire 6 times at agricultural lands in access restricted areas mostly in eastern Khan Younis. It was also reported that 7 IOF shooting incidents took place against fishing boats, mostly in the northern Gaza sea. No injuries were reported.

“Since the beginning of 2022, IOF attacks killed 2 Palestinians and wounded 40 others, including 6 children and 2 journalists, all in the West Bank.”

IOF demolished 8 houses in the West Bank, including 5 that were under-construction, and one apartment’s interior contents completely destroyed and its front door sealed. This act of collective punishment has resulted in 3 families becoming homeless, a total of 17 people (3 women and 12 children). IOF also demolished other establishments and properties, and served 11 cease-construction notices against 4 houses, a mosque, and other commercial establishments. The majority of the destroyed houses were in occupied East Jerusalem.

“Since the beginning of 2022, Israeli occupation forces have made 21 families homeless, a total of 128 people, including 23 women and 50 children. This was the consequence of IOF demolition of 26 houses and 3 residential tents. IOF also demolished 10 other civilian objects.”

Palestinians were forced to self-demolish 4 houses in occupied East Jerusalem in execution of Israeli Municipality orders, allegedly for non-licensed construction:

IOF carried out 132 incursions into the West Bank, including occupied East Jerusalem. Those incursions included raids of civilian houses and shootings, enticing fear among civilians, and attacking many of them. During this week’s incursions, 112 Palestinians were arrested, including 8 children and a woman.

In the Gaza Strip, IOF arrested three Palestinians attempting to cross the border area, 2 in eastern Rafah, and a 3rd in northern Gaza. Also on 1 February 2022, IOF conducted a limited incursion into eastern Khan Younis.

On 29 January 2022, the Palestinian Ministry of Health in Gaza announced that the Israeli authorities have banned the import of new medical radiology devices for the Gaza Strip hospitals for several months, including stationary and mobile x-ray machines. Further details are available in this press release. This act is in continuation of Israel’s illegal and inhuman 15-year closure on the Gaza Strip. More information is available in PCHR’s monthly update on the Gaza crossings.

“In the West Bank, IOF continues to impose restrictions on the freedom of movement. On top of its 108 permanent checkpoints, IOF established 60 temporary military checkpoints this week and arrested 8 Palestinians at those checkpoints. The majority of the checkpoints were in Hebron (26) followed by Bethlehem (11).”