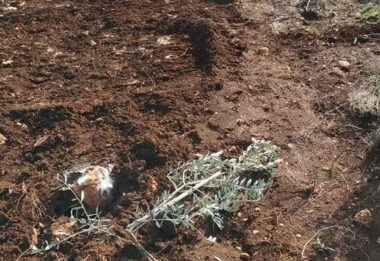 A group of fanatic illegal Israeli colonizers invaded, Thursday, a Palestinian orchard in the Khallet ad-Dabe’ area, in Masafer Yatta, south of Hebron, in the southern part of the occupied West Bank, and uprooted at least sixty olive saplings, in addition to attacking shepherds.

Fuad al-‘Amour, the coordinator of the National Protections Committee in southern Hebron, said the colonizers uprooted at least sixty olive saplings that the Palestinians recently planted.

He added that the attack was the second of its kind in the same area in less than two months.

In related news, a group of colonizers invaded Palestinian lands between Silat ath-Thaher and Burqa town, south of the northern West Bank city of Jenin. At the same time, Israeli soldiers stood and watched and prevented the Palestinians from entering the area.