PCHR Press Release: “IOF Kill 2 Palestinians and Wound 6 Others including 2 Children in the West Bank” 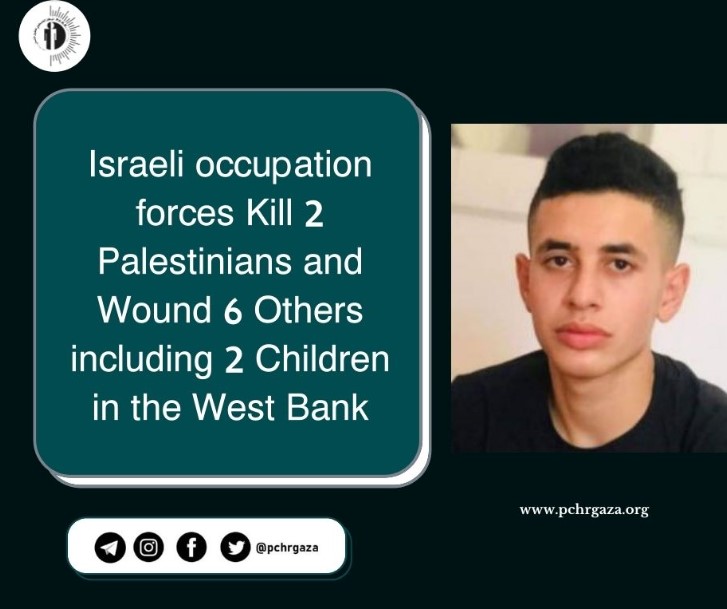 The Palestinian Center For Human Rights – PCHR: Ref: 49/2022 – Date: 27 April 2022. Time: 10:00 GMT: Israeli occupation forces (IOF) killed 2 Palestinians and wounded 6 others, including 2 children, in two separate incidents during their incursions into Jenin and Jericho in the West Bank.

PCHR investigations into the murder of a Palestinian man from Jenin showed that IOF moved into Jenin and its refugee camp at approximately 17:30 on Wednesday, 27 April 2022. IOF raided several houses and arrested several civilians.

The locals gathered and threw stones and empty bottles at the IOF vehicles, while the soldiers started shooting live and rubber-coated bullets, sound, and tear gas bombs at them. As a result,  one Palestinian was killed and 3 others were wounded, including one child. The killed victim was identified as Ahmed M. F. Masad (21) from Burqin, western Jenin.

He was shot with a live bullet in the head as IOF withdrew from the area at nearly 07:00. Masad was present on a hill overlooking Jenin-Haifa Road, west of the city.

Additionally, PCHR’s fieldworkers investigated the murder of another Palestinian man in Jericho. At approximately 01:15 on Tuesday, 26 April 2022, a unit of the Israeli Mista’arvim unit sneaked into Aqabat Jabr refugee camp, southern Jericho. The unit used a white Mercedes-Benz truck and stationed in al-Jamee st; they attacked Abu-Mousa al-Ajouri’s workshop and arrested 2 civilians present inside the workshop: Mohammed Mousa al-Ajouri (50) and his son Mousa (26).

Meanwhile, a large IOF troop moved into the refugee camp; a group of young Palestinians gathered and threw stones and empty bottles at the IOF vehicles, while the soldiers started shooting live and rubber-coated bullets, sound, and tear gas bombs at them.

As a result, 4 Palestinians were wounded, including one child. At the time, one of the wounded civilians, Ahmed I. Owaidat (20), was in critical condition with a live-bullet injury in the head. He was taken to the emergency room at Jericho governmental hospital, and then transferred to Istishari Arab Hospital in Ramallah. He underwent a 4-hour head surgery. At approximately 09:00, he was pronounced dead due to severe injury to the head with a live bullet that penetrated the brain.

So far this year, the Israeli occupation forces killed 41 Palestinian, including 32 civilians of them were 8 children and 3 women. The others are active members of armed groups, 3 of them were extrajudicially executed.

Moreover, hundreds of others sustained wounds in IOF attacks, including women and children, across the West Bank, including occupied East Jerusalem.

PCHR reiterates its call upon the international community to take immediate action to stop the Israeli occupation’s crimes and reiterates its call upon the High Contracting Parties to the 1949 Fourth Geneva Convention to fulfill their obligations under Article 1; to respect and ensure respect for the Convention in all circumstances and their obligations under Article 146 to prosecute persons alleged to commit grave breaches of the Fourth Geneva Convention; noting that these violations are considered war crimes in accordance with Article 147 of the Convention and in accordance with the Additional Protocol I of the Convention to guarantee the right of protection for Palestinian civilians in the occupied territory.