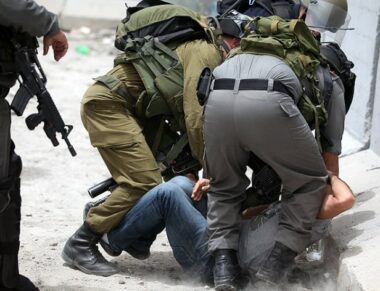 Israeli soldiers abducted three Palestinians, including a father and his son, from their homes in the Hebron governorate, in the southern part of the occupied West Bank. The army also detained teachers and prevented them from reaching their educational facilities.

The soldiers invaded the Khirbat Qalqas area, east of Hebron, and violently searched homes before abducting Walid Abu Turki and his son Mohammad.

In the al-‘Arroub refugee camp, north of Hebron, the soldiers invaded and searched the homes of former political prisoners, Nassim Teety and Salah Rajab Jawabra, and summoned them for interrogation.

Furthermore, the soldiers detained several schoolteachers In Masafer Yatta, south of Hebron, preventing them from reaching their educational facilities.

The soldiers interrogated the teachers while inspecting their ID cards and refused to allow them to cross a military roadblock.

On Wednesday dawn, the soldiers abducted at least ten Palestinians, including former political prisoners, from their homes in several parts of the occupied West Bank.

In related news, Israeli navy ships attacked several Palestinian fishing boats near the Rafah shore in the southern part of the Gaza Strip, abducted six fishermen, and confiscated their boats.