PCHR: Urgent Appeal to Protect the Lives of Palestinian Administrative Detainees on Hunger-Strike in Israeli Prisons 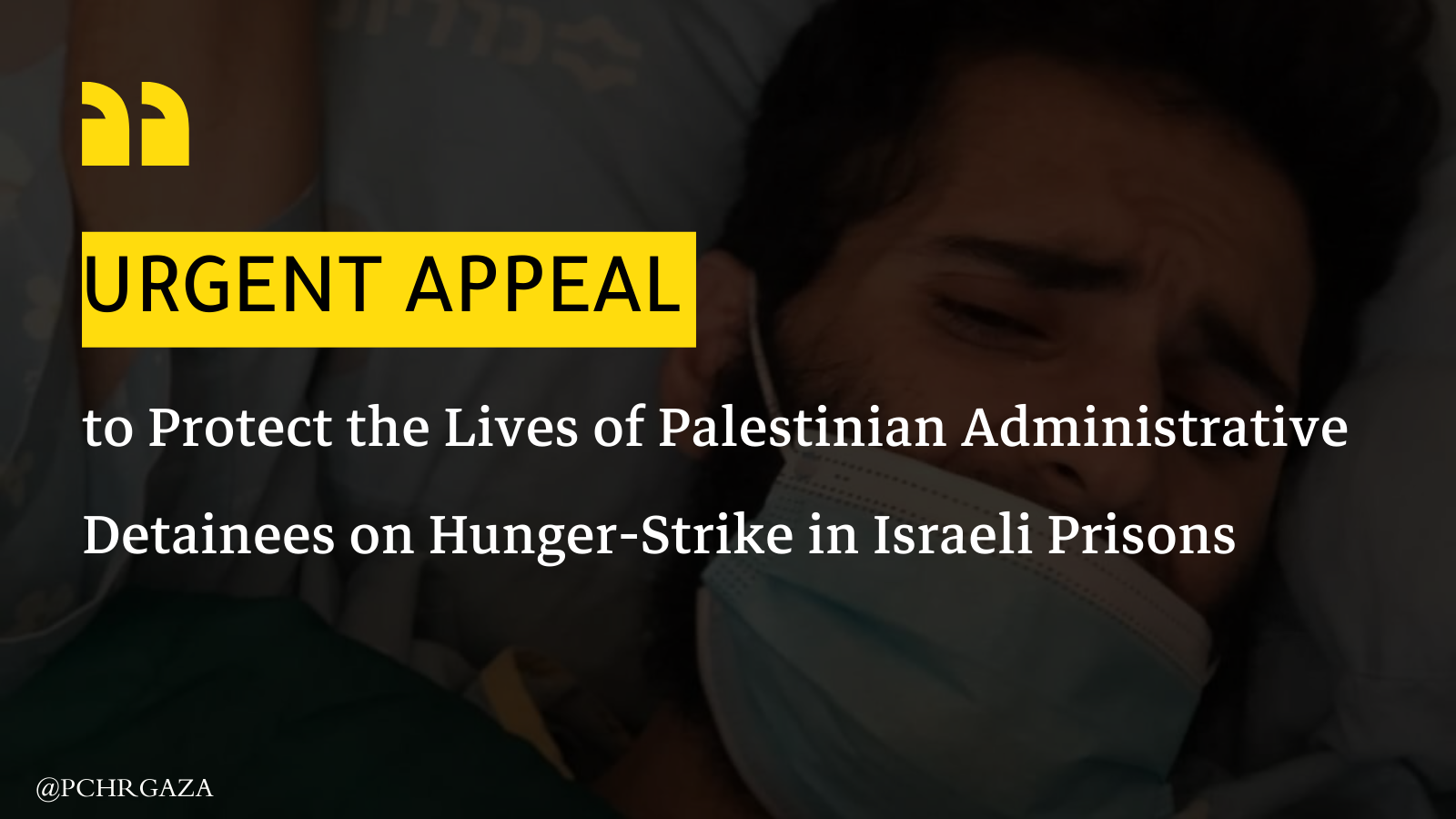 November 10, 2021 – The Palestinian Centre for Human Rights (PCHR) follows with grave concern the conditions of 6 Palestinians put under administrative detention in Israeli occupation’s prisons, who have gone on hunger strike for months in protest of their detention. PCHR demands the international community put pressure on the Israeli occupation to release them immediately.

As part of its legal services, PCHR lawyer, Mr. Mahmoud al-Madani, managed to visit two of his clients currently held at al-Ramla clinic: Hesham Abu-Hawash (39) from Dura, Hebron; and Shaky Abu-Aker (27) from Aida refugee camp, Bethlehem. Abu-Hawash has been on hunger strike for 84 days, his health is in critical condition. He suffers severe pain across his body and a chronic headache, he refuses to take any supplements except for water. Abu-Akar held his hunger-strike for 65 days, and broke it two weeks ago; however, he suffers retina damage due to vitamin deficiencies caused by his hunger-strike with only 5% visual capacity. He has a chronic headache, imbalance, and dizziness.

Earlier, PCHR lawyer visited our client Kayed al-Fasfous at Barzilai Medical Center, along with his mother; his heart rate is low and he is immobile.

It is noteworthy that 5 prisoners continue on hunger-strike in protest to their administrative detention:

The Israeli occupation’s practices against the detainees on hunger-strike reflect its racism and flagrant breaches of human principles and values, particularly as hunger strikes are considered the most difficult choice for prisoners to regain their basic human rights which are guaranteed in all international laws and standards. It should be noted that the Israeli occupation use the illegal administrative detention policy loosely and arbitrary as more than 500 Palestinians who are currently placed under administrative detention in Israeli prisons and detention facilities.

1. Holds the Israeli authorities fully accountable for the detainees’ lives;

2. Calls upon the international community to immediately intervene to put an end to the administrative detention policy and applying it arbitrarily and illegally against Palestinian prisoners; and

3. Calls for conjugating local and international efforts to support the Palestinian prisoners and their demands to live freely and in dignity.