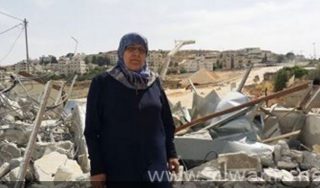 Israeli forces conducted 57 incursions into Palestinian communities in the West Bank. 36 civilians, including 5 children, were abducted. 8 of them, including a child, were abducted in occupied Jerusalem. Among the abducted was a PLC member and the former Minister of Prisoners.

On 15 May 2016, Israeli forces opened fire at 32-year-old male while attempting to sneak into occupied Jerusalem, heading to his workplace. As a result, he sustained a bullet wound to the head. His injury was classified as moderate.

3 houses were demolished in al-Sowana neighbourhood and Shu’fat village, leaving 30 civilians homeless. Concerning house demolitions, on 17 May 2016, Israeli municipality bulldozers demolished 2 houses in al-Sowana neighbourhood, east of Jerusalem’s Old City in application of the Central Court’s decision to demolish the 2 houses for being built on lands classified as “National Parks” without license.

On 18 May 2016, Israeli forces demolished a house belonging to Rajeh Hawareen in Shu’fat village, north of occupied Jerusalem for the interest of establishing a settlement road. It should be noted that the house was built in 2001 and used to shelter a 7-member family.

In the Gaza Strip, in the context of the use of forces against peaceful protests, 3 Palestinian civilians, including a child, sustained bullet wounds to the lower limbs while participating in peaceful protests near the border fence between the Gaza Strip and Israel, east of al-Bureij. The wounded were taken to al-Aqsa Martyrs’ Hospital to receive the necessary medical treatment. In addition, 2 of them were transported to Shifa Hospital in Gaza City.

Concerning targeting border areas, on 18 May 2016, Essa al-Ejla (19), sustained a bullet wound to the right leg when Israeli forces stationed at the border fence, east of al-Shuja’iya neighbourhood, east of Gaza City, opened fire. The aforementioned person was working in his farmland that is about 500 meters away from al-Muntar (Karni) crossing.

On 16 May 2016, Israeli gunboats stationed off Beit Lahia shore, north of the Gaza Strip, opened fire at fishing boats. A gunboat approached a fishing boat manned by 2 fishermen. The Israeli navy forces abducted both of them and confiscated their boat.

The illegal closure of the Gaza Strip, which has been steadily tightened since June 2007 has had a disastrous impact on the humanitarian and economic situation in the Gaza Strip.

The Israeli authorities impose measures to undermine the freedom of trade, including the basic needs for the Gaza Strip population and the agricultural and industrial products to be exported.

For 9 consecutive years, Israel has tightened the land and naval closure to isolate the Gaza Strip from the West Bank, including occupied Jerusalem, and other countries around the world.

This resulted in grave violations of the economic, social and cultural rights and a deterioration of living conditions for 1.8 million people. The Israeli authorities have established Karm Abu Salem (Kerem Shaloum) as the sole crossing for imports and exports in order to exercise its control over the Gaza Strip’s economy.

They also aim at imposing a complete ban on the Gaza Strip’s exports. The Israeli closure raised the rate of poverty to 38.8%, 21.1% of which suffer from extreme poverty. Moreover, the rate of unemployment increased up to 44%, which reflects the unprecedented economic deterioration in the Gaza Strip.

Israeli settlers, accompanied by soldiers, continued to assault Palestinian civilians and property this week. About 30 olive trees were burnt at the eastern entrance to Kufor Qaddoum village, northeast of Qalqilya.

In a separate incident, at approximately 10:00 on Wednesday, 18 May 2016, Israeli forces accompanied with two military jeeps and a vehicle belonging to the Construction and Organization Department in the Israeli Civil Administration moved into Beit Ommar village, north of Hebron.

They patrolled in the streets of Beit Z’atah, al-Furaidas, Thughret al-Shabak area and the northern areas of the city. The Civil Administration officer handed 4 civilians notices to stop building water tanks built of concert and tin in order to collect water for agriculture.

Those water tanks were built in the beginning of 2016 as part of a program to develop Water Resources for marginalised lands in the West Bank funded by the European Union and implemented by the Palestinian Hydrology Group and Agricultural Work Committees Union.

In the West Bank, regarding the use of forces against peaceful protests, 2 Palestinians were wounded while participating in Kufor Qaddoum weekly protest, northeast of Qalqilya. The first (18) sustained a bullet wound to the left leg and the second (26) sustained a sponge-tipped bullet to the head. Moreover, a child (15) sustained a bullet wound to the right knee while participating in a protest around “Psagot” settlement, east of Ramallah, marking the Nakba Day.

During those protests, Israeli forces abducted Abdullah Abu Rahma (43), coordinator of the popular committee against the annexation wall and settlement activities in Bil’in village, west of Ramallah, and an Israeli activist. Moreover, as a result of Israeli forces firing sound bombs and tear gas canisters, about 30 olive trees at the eastern entrance to Kufor Qaddoum village, northeast of Qalqilya.