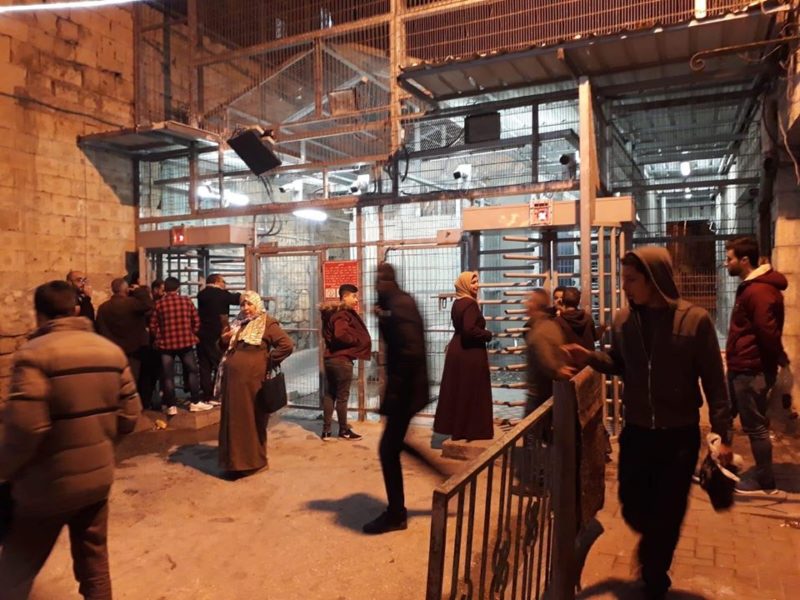 In terms of excessive use of force, IOF wounded 9 Palestinian civilians, including 4 children, on the 84th Friday of the Great March of Return and Breaking the Siege protest (GMR) in eastern Gaza Strip.

Meanwhile in the West Bank, 4 civilians were injured, including a paramedic and a child. IOF arrested the child, claiming that he attempted to throw a Molotov Cocktails in Bethlehem.

Under IOF incursions and house raids, 99 incursions into the West Bank, including occupied East Jerusalem, were reported. Those incursions included raids of civilian houses and shootings, enticing fear among civilians, arresting and/or injuring many others. During this week’s incursions, 77 Palestinians were arrested, including 22 children and 5 women.

Moreover, 6 shootings were reported by IOF at agricultural lands in the northern and eastern of the Gaza Strip; while 3 others were reported by the Israeli gunboats against the Palestinian fishing boats sailing off Gaza Shore.

PCHR also documented 3 settler-attacks against Palestinian civilians and their property, including attacking busses in Bethlehem; damaging road construction machines in Northern Jordan Valleys, and shootings in eastern Qalqiliyah, which caused material damage to a house and fear among its residents, but no injuries among them were reported.

In terms of the Israeli closure policy, the Gaza Strip still suffers the worst closure in the History of the Israeli occupation of the oPt as it has entered the 14th consecutive year, without any improvement to the movement of persons and goods, humanitarian conditions and bearing catastrophic consequences on all aspects of life. Furthermore, IOF uses Erez Crossing that is designated for movement of individuals as an ambush to arrest Palestinians who obtain permits to exit via Israel.  During the reporting period, IOF arrested a Palestinian civilian, from Gaza City, while travelling to Turkey via Erez Crossing.  Meanwhile, the West Bank is divided into separate cantons with key roads blocked by the Israeli occupation since the Second Intifada and with temporary and permanent checkpoints, where civilian movement is restricted and they are subject to arrest as 5 Palestinians were arrested this week only.

Violation of the right to life and to bodily integrity

Excessive Use of Force against Protests in the Gaza Strip

On the 84th Friday, 13 December 2019, weekly protests were launched in the Rafah, al-Buraij refugee camp in addition to Gaza City and were cancelled in Khan Younis and northern Gaza Strip, on the anniversary of the founding of Hamas Movement. This Friday’s protest titled: “Palestine Unites us and Jerusalem is our Capital”, resulted in the injury of 9 civilians, including 4 children.

Abdul Halim Ja’afrah, Head of Emergency & Ambulance Services at Palestine Red Crescent Society (PRCS), said to PCHR’s fieldworker that he received an information about a civilian shot and injured by IOF in al-Anfaq area. An ambulance headed to the area, but IOF banned it from reaching the wounded civilian, who was identified as Hamzah Khalid ‘Ayad al-Haremi (16).

Avichay Adraee, the spokesperson of the Israeli forces, claimed that IOF spotted  a person throwing a Molotov Cocktail at Israeli vehicles near Beit Jala village. He added that IOF opened fire at him, wounding him. They then chased and arrested him, without revealing the nature of his injury.

According to local sources, PCHR’s fieldworker stated that IOF took the wounded child to “Ofer” military prison established on lands, west of Ramallah. After that, al-Haremi underwent a surgery at Shaare Zedek Medical Center in Israel. An extension hearing will be held  for the arrested child next Thursday in the Israeli Military Court.

Demolition and Confiscation of Civilian Property for Settlement Expansion Activities

Fully detailed document available at the official website of the Palestinian Centre for Human rights (PCHR).