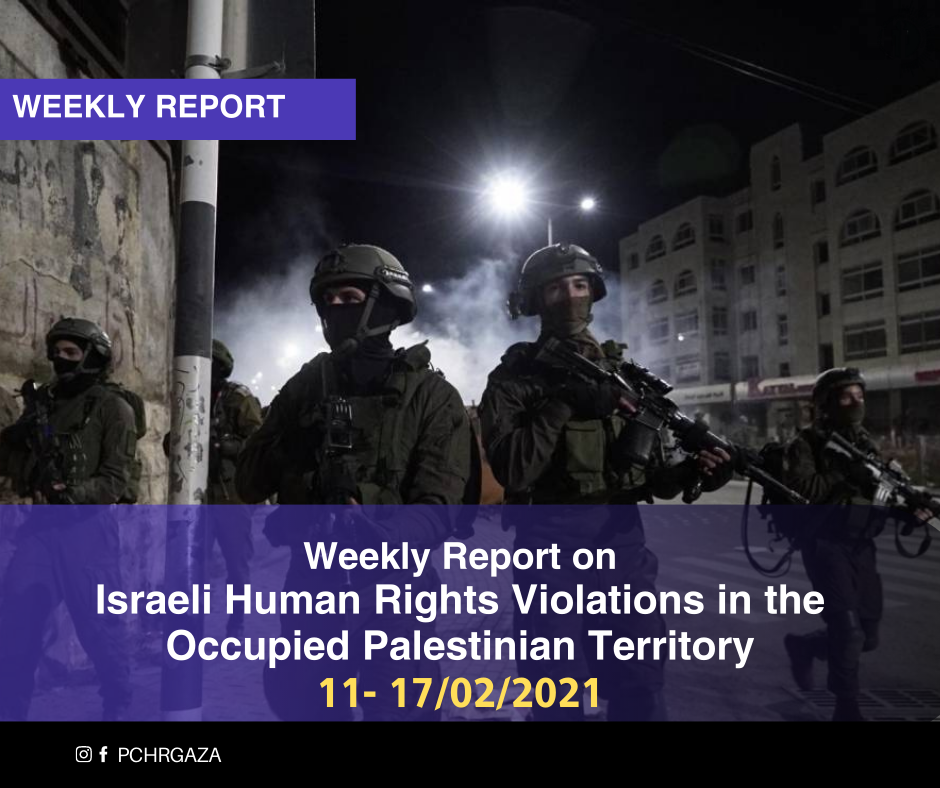 Israeli occupation forces (IOF) continued to commit crimes and multi-layered violations against Palestinian civilians and their properties, including raids into Palestinian cities that are characterized with excessive use of force, assault, abuse and attacks on civilians that are mostly conducted after midnight and in the early morning hours. Additionally, IOF conducted wide-scale demolition operations; and served demolition and cease-construction notices, mostly in the northern Jordan Valleys, eastern West Bank. Settler attacks continued this week, particularly attacks on civilian houses and vehicles in Nablus.

Also, the Israeli occupation authorities stalled the entry of 2,000 Covid-19 vaccines into the Gaza Strip for two days. The vaccines were sent by the Ministry of Health in Ramallah.

On 17 February 2021, 67-year-old Rahma Khalil Abu-Ahour, from Abu Nujaym village in eastern Bethlehem, died of a heart attack she suffered during an IOF raid into her nephew’s house where she was visiting. Additionally, IOF shot and injured 19 civilians in its attacks on peaceful protests in the West Bank: 4 at a protest in Beit Dajan – Nablus; 9 others at two protests in Kufur Qaddoum – Qalqilia; and 6 by Salfit’s northern entrance.

IOF carried out 106 incursions into the West Bank, including occupied East Jerusalem. Those incursions included raids of civilian houses and shootings, enticing fear among civilians, and attacking many of them. During this week’s incursions, 71 Palestinians were arrested, including 13 children and a woman.

Occupied East Jerusalem: 5 self-demolitions: an external room overlooking the al-Aqsa Mosque; an apartment in Sur Baher; 2 barracks in Silwan; an apartment building in Shu’afat; IOF served an apartment building an evacuation order in Silwan; An Israeli court rejected the appeal of 4 families to annul the evacuation order issued against their homes in Sheikh Jarrah; A house was demolished in Ras al-Amud; Metal fence surrounding a plot of land in Jabel Mukaber removed.

Hebron: shepherds and a Palestinian family assaulted in eastern Yatta

Nablus: assault on civilians and worshippers in Khan al-Laban; a farmer was also assaulted in the area. A bus and civilian houses were assaulted in Asira al-Qibliya and Qusra. Also, a car was set on fire.

Tulkarem: civilian was kidnapped while at his land; IOF later released him.

Ramallah: assaults on the vehicles of Palestinian workers parked near “Shilo” settlement, which is established on the lands of Turmus Ayya in northeastern Ramallah.

7. Ministry of Agriculture: A 500-cbm water tank established 10 years ago

Those affected were as follows:

PCHR is an independent Palestinian human rights organization (registered as a limited non-profit company) based in Gaza City.