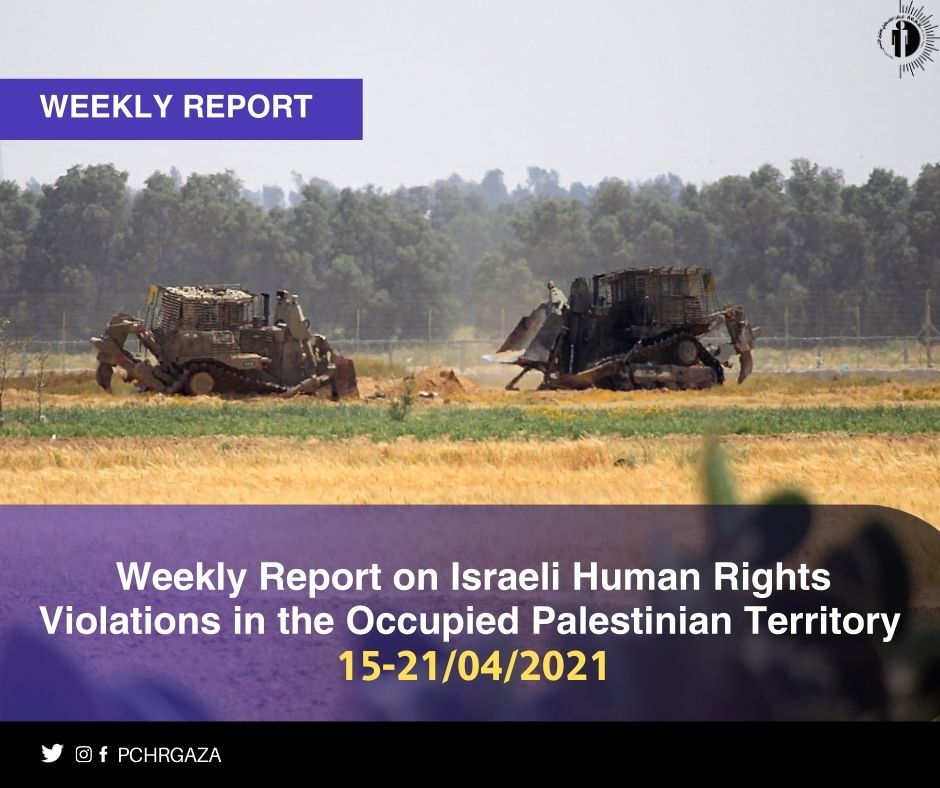 Israeli occupation soldiers continued to commit crimes and multi-layered violations against Palestinian civilians and their properties, including raids into Palestinian cities that are characterized with excessive use of force, assault, abuse and attacks on civilians that are mostly conducted after midnight and in the early morning hours. This week, soldiers detained 3 Palestinians running for the Legislative Council elections and an elections-related meeting was banned in occupied East Jerusalem; soldiers also continued to suppress worshipers in Damascus Gate before and after Maghreb prayers. Even more, soldiers continued its demolition operations and delivery of cease-construction and demolition notices in the West Bank, including occupied East Jerusalem. The Palestinian Centre for Human Rights (PCHR) documented 162 violations of international human rights law and international humanitarian law (IHL) by soldiers and settlers in the occupied Palestinian territory (oPt).

Israeli army shooting and violation of right to bodily integrity:

Seven Palestinians sustained wounds as a result of Israeli soldiers’ excessive use of force against civilians in the West Bank: six were wounded in occupation forces suppression of worshipers and passersby in Damascus Gate, which leads to Al-Aqsa Mosque; another civilian was wounded at the weekly Kufur Qaddoum protests in Qalqilia. Dozens of others suffocated due to tear gas inhalation, and others were wounded in various assaults by Israeli soldiers, across the West Bank.

In the Gaza Strip, Israeli warplanes launched several airstrikes in the Gaza Strip: 2 on lands in Rafah and Buraij refugee camp, causing partial damage to a vacant poultry farm. Additionally, 4 army shootings were reported on agricultural lands eastern Gaza; and 6 at fishing boats in the Gaza sea.

The army carried out 95 incursions into the West Bank, including occupied East Jerusalem. Those incursions included raids of civilian houses and shootings, enticing fear among civilians, and attacking many of them. During this week’s incursions, 46 Palestinians were arrested, including 8 children and a journalist. Soldiers also detained 3 candidates for PLC elections (2 from Fatah List and the third from the United Left List) in occupied East Jerusalem; they were detained for several hours and informed that all election-related activities are banned in the city.

Hebron: cease-construction notice served against an Islamic cemetery that is being restored; mobile caravan confiscated and a car towing a caravan.

Meanwhile, the occupation authorities continued to divide the West Bank into separate cantons with key roads blocked by the Israeli occupation since the Second Intifada and with temporary and permanent checkpoints, where civilian movement is restricted, and they are subject to arrest.

At approximately 16:30, the army detained Thabet Mahmoud al-Najjar (19), from al-Fawwar refugee camp, south of Hebron, after stopping him on a temporary military checkpoint established at the entrance of the camp that leads to Bypass Road (60).

At approximately 01:30, the army, reinforced with several military vehicles moved into Hebron, and stationed in Dweirian. They raided and searched Nidal Emran al-Qawasma’s (44) house and arrested him.

At approximately 03:30, the army, reinforced with several military vehicles moved into Yatta, south of Hebron governorate, and stationed in al-Karmil area. They raided and searched Mohammed Ali al-Jabbour’s (39) house and arrested him.

His wife, Maymouna al-Rimawi, said to PCHR’s fieldworker that:

We woke up to the sound of the Israeli military vehicles near the main door of the house, so Alaa headed and opened the door, and suddenly 10-12 Israeli soldiers stormed and deployed in the house. The force officer ordered Alaa to bring his ID card, when he brought it they ordered him to wear his clothes to arrest him and put him in one of the military vehicles. She added: “while arresting Alaa he told me that he will start a hunger strike to condemn his arrest.”

Posted by Palestinian Centre for Human Rights on Thursday, April 22, 2021