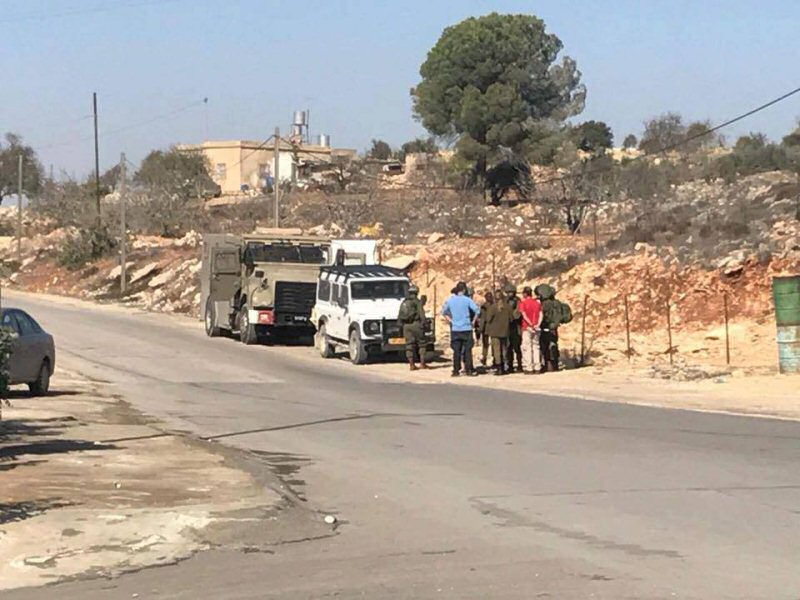 Israeli forces continued with systematic crimes in the occupied Palestinian territory (oPt) for the week of 23 – 28 November, 2017.

During the reporting period, Israeli forces wounded 2 Palestinian civilians, including a child, and an interntional activist in the West Bank while wounded a child in the Gaza Strip.  In the Gaze Strip, They also continued to chase Palestinian fishermen in the Sea.

In the West Bank, on 24 November 2017, A German activist was wounded with a bullet to the right side of his back while participating in Ni’lin weekly protest, west of Ramallah.

On 26 November 2017, 2 Palestinian civilians, including a child, were wounded when Israeli forces opened fire at dozens of students in al-‘Aroub refugee camp, north of Hebron, as the latter organized a peaceful protest in commemoration of the killing of child Khalid al-Jawabrah near the bypass road in the civinty of the refugee camp.

In the same context, Israeli forces continued to use force against the protests organized by Palestinian civilians and international human rights defenders against the annexation wall, confiscation of lands and crimes of settlement expansion.  During the reporting period, dozens of Palestinian civilians, international human rights defenders and Israelis organized protests in Ni’lin and Bil’in villages, west of Ramallah, al-Nabi Saleh village, northwest of the city, and Kafer Qadoum village, northeast of Qalqiliyah, in protest against the annexation wall and settlement activities. Israeli forces forcibly dispersed the protests. As a result, many of the protesters suffered tear gas inhalation while others sustained bruises due to being beaten up by the Israeli soldiers.

In the Gaza Strip, the border areas with Israeli witnessed protests against the ongoing and unjust Israeli closured against the Gaza population.  During those protests, the Israeli forces used forces against the protesters.  as a result, a child was wounded, east of Jabalia in the northern Gaza Strip.

In the Gaza Strip, as part of targeting fishermen in the sea, PCHR monitored the Israeli naval forces’ escalation against fishermen in the Gaza Sea although it was announced that the Gaza fishermen are allowed to sail to 9 nautical miles instead of 6.  This proves that the Israeli forces continue their policy of targeting fishermen in their livelihoods.  During the reporting period, Israeli gunboats chased fishing boats and opened fire at them 3 times; 1 of them in the north-western Beit Lahia and the others in the western Soudaniyah area, west of Jabalia in the northern Gaza Strip.

Measures to Make a Jewish Majority in occupied East Jerusalem

As part of the house demolitions, on 23 November 2017, Israeli Municipality bulldozers demolished a house belonging to the family of ‘Issam al-Rajabi in al-Ashaqriyah neighbourhood in Beit Hanina, north of occupied East Jerusalem, rendering its residents homeless during the cold and rainy weather.  The above-mentioned civilian said that he built his house in 2010 on an area of 140 square meters, and the Israeli Municipality fined him with 20,000 shekels in instalments.  He paid 43 instalments but there are 7 instalments left.  During this year, he added a 30-square-meter structure to the house, but the Municipality notified him that they will demolish it.  On the abovementioned date, the house sheltering a family of 10 members along with the additional structures was demolished.

On 25 November 2017, Israeli forces forced Jamal Abu Teir from Um Touba, southeast of occupied East Jerusalem, to self-demolish his house, upon a decision by the Israeli Municipality.  Abu Teir said that he self-demolished his house after evacuating it to avoid paying the very high demolition expenses for the municipality.  The house was built on an area of 40 square meters and used to shelter a family of 5 members.

As part of the demolition of houses and other civil facilities, on 27 November 2017, Israeli forces demolished a barrack built of tin plates in Beit ‘Aynoun area, east of Hebron.  The 120-square-meter barrack belongs to Mohammed Meswadeh (45) under the retext of builing without a license and is used for ferrous metals.

As part of the Israeli settlers’ attacks against Palestinian civilians and their property, on 28 November 2017, Israeli settlers from “Mtsa Ya’ir” and “Yitir” settlements attacked Palestinian farmers and shepherds from Kherbet Um Hanitah adjacent to Mneizel village to the east of Yata, south of Hebron, while the latter were grazing their sheep and ploughing their lands to plant winter crops.  The settlers attacked them with stones, batons and hands and when the farmers and shepherds tried to defend themselves, the Israeli soldiers attacked them without stopping the settlers and moving them away.  The Israeli soldiers then arrested 4 civilians, including a mother of 5 children.

(PCHR keeps the name of the wounded child)

‘Esam al-Rajabi (43), the house owner, said that the Israeli bulldozers, under the Israeli police’s protection, raided his house in al-Ashqariyia neighborhood and demolished it under the pretext of non-licensing.  He also said that the Israeli forces ordered him and his family to get out of the house and did not allow them to vacate the house contents. Al-Rajabi said the Israeli District Court in Jerusalem held a session on 08 November 2017, in order to extend the demolition decision, but the court rejected the lawyer’s demand. Few days later, the lawyer headed to the Jerusalem Municipality Court to obtain an order to stop the demolition, but he did not get any response. ‘Esam also said that a police officer in al-Nabi Ya’qoub Police Station in Beit Haninah contacted him yesterday informing him that the house will be demolished next week. As a result, the lawyer submitted an appeal to the Israeli Supreme Court. Al-Rajabi pointed out that the Israeli District Court’s decision, which was issued at the beginning of this month, ordered to demolish a 30-square-meter structure added to the old house. He also said that he was surprised with the Israeli Municipality bulldozers demolishing the 140-square-meter house. Although he objected to the demolition of the old house, the Israeli Municipality officers insisted on demolishing the whole house. ‘Esam said that he built the house in 2010, and the Israeli Municipality imposed a construction fine on him of NIS 20,000 in installments. He paid 43 installments while there are still 7 payments left.  He had to add a 30-square-meter structure to his old house 5 years ago for his son Kamel, who wanted to get married. ‘Esam applied for a license few years ago, but the Jerusalem Municipality did not respond. The abovementioned house used to shelter 10 persons and was comprised of 4 rooms, kitchen, bathroom, and 2 other rooms for Kamal.