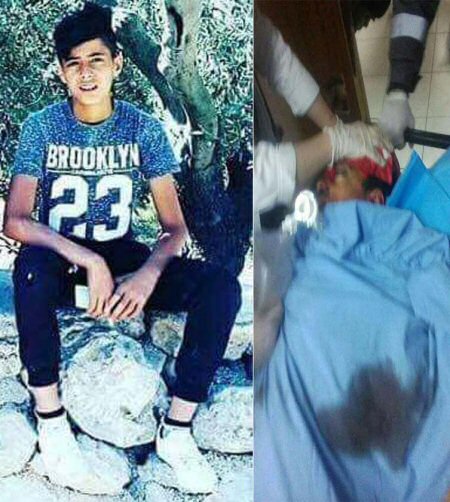 Israeli forces continued with systematic crimes in the occupied Palestinian territory (oPt) for the week of 25 – 31 January, 2018.

A Palestinian child was killed in al-Mughayer village, northeast of Ramallah, while 12 Palestinian civilians, including 3 children, were wounded in the West Bank and Gaza Strip, 11 of them with live bullets, and one with rubber-coated steel.

In the West Bank, in new crime of excessive use of lethal force, on Tuesday, 30 January 2018, Israeli forces killed a 17-year-old Palestinian child when they moved into al-Mughayer village, northeast of Ramallah.  According to PCHR’s investigations and eyewitnesses’ accounts on the last crime, at approximately 16:30 on the above-mentioned day, Israeli forces moved into the village and stationed in the center of it.  A number of Palestinian children and youngsters gathered to throw stones and empty bottles at the Israeli vehicles.  A soldier from one of the vehicles immediately fired one bullet that hit Laith Haitham Fathi Abu Na’im (17), entering his right eye and exiting his head.  The wounded child was taken by an ambulance to the Palestine Medical Complex in Ramallah to receive medical treatment and admitted to the Emergency Department; however, he drew his last breath only minutes after.  Eyewitnesses said that the bullet was shot at Abu Na’im at very close range, and he did not pose any threat to the life of the Israeli soldiers.

On 31 January 2018, 2 Palestinian civilians were wounded when Israeli forces moved into Jenin and its refugee camp to carry out an arrest campaign.  A number of Palestinian children and youngsters then gathered to throw stones and empty bottles at the Israeli vehicles.  The Israeli forces immediately fired live and rubber bullets at them, wounding the 2 civilians.  In similar circumstances, a child was wounded with a rubber bullet to the eyelid when Israeli forces moved into the eastern area in Nablus.

During the reporting period, the West Bank witnessed protests against the U.S. President’s decision to recognize Jerusalem as the capital of Israel and move the U.S. Embassy to Jerusalem. During the protests, the Israeli forces used force against the protesters, and the shooting to disperse the protests resulted in the injury of one child in Sa’ir village, northeast of Hebron.  The child was hit with a bullet to the foot and then arrested to be taken to an unknown destination.

In the Gaza Strip, the border areas with Israel witnessed protests against the U.S. President Donald Trump’s decision to recognize Jerusalem as the capital of Israel and move the U.S. Embassy to it.  During the protests, the Israeli forces used force against the protestors.  Due to opening fire to disperse the protests, 8 Palestinian civilians were wounded, including a child, with live bullets. Four of them, including the child, were wounded in Northern Gaza Strip; 3 in central Gaza Strip; and one in Khan Younis.

As part of targeting the border areas, on 28 January 2018, Israeli soldiers opened fire at the shepherds, east of Gaza Valley village near the eastern borders of the village.  However, no casualties were reported.

On 31 January 2018, Israeli forces stationed along the border fence between the Gaza Strip and Israel, east of Beit Hanoun, opened fire at the border area.  However, neither casualties nor damage was reported.  On the same day, the Israeli soldiers stationed along the border fence, east of al-Maghazi refugee camp, opened fire at the agricultural lands in the eastern areas.  The shooting recurred in the same area many times, but no casualties were reported.

Efforts to Create a Jewish Majority in occupied East Jerusalem:

As part of demolitions in favour of the settlement projects, on 30 January 2018, Israeli municipality staffs in Jerusalem demolished 6 barracks and 9 commercial and agricultural facilities in al-‘Issawiyah village, northeast of the city.  Mohammed Abu al-Humus, Member of the Follow-up Committee in the village, said that the Israeli forces accompanied with staffs from the municipality and Nature Authority moved into the aforementioned village and demolished the facilities in favour of the national parks in the village.

Settlement Activities, Demolitions, and Settlers’ Attacks against Palestinian civilians and their Property:

As part of house demolitions, on 29 January 2018, Israeli forces accompanied with 5 bulldozers moved into Beir ‘Ounah area, west of Beit Jala, and demolished two under-construction residential buildings in the area under the pretext of non-licensing.  The first building belonged to Walid Rezeq Zarinah and was comprised of 4 floors with 8 residential apartments while the second belonged to Mohammed ‘Abdel Hadi al-Hroub and was comprised of 6 floors with 12 residential apartments.  The demolition of those buildings revealed the Israeli forces’ intention to carry out further demolitions in the area, which is full of residential apartments mostly resided by civilians holding Jerusalemite IDs.  It should be mentioned that Beit ‘Ounah area and al-Weljah village adjacent to the southern borders of occupied Jerusalem are systematically exposed to demolition campaigns to force the residents to leave the area and annex it to the settlements established on Palestinian lands there as part of the “Great Jerusalem” project.  The Israeli municipality in Jerusalem also exerts effective influence over these areas, demolishes houses built without obtaining licenses which are never issued to the residents, and imposes property taxes on the other residents of the area.

On the same day, Israeli forces accompanied with vehicles belonging to the Israeli construction and organization Department in the Civil Administration moved into al-Hemarah area in area (C), east of Bet Dajen villages, east of Nablus.  They handed owners of 3 houses demolition notices though the cases of those houses are pending before the Israeli courts.

On 31 January 2018, Israeli forces moved into Irfa’iyah area to the east of Yata, south of Hebron.  They dismantled a house built of tin plates on an area of 80 square meters on the house roof of Kamel Rab’ie al-Qadeem.

Upon calls for demonstrations protesting against the U.S. President Donald Trump’s Presidential Decree to recognize Jerusalem as the capital of Israel and move the U.S. Embassy to it, Palestinian civilians organized protests against the decision throughout the West Bank and Gaza Strip. As a result, 9 civilians, including 2 children, were hit with live bullets. One of the children was arrested. (This number does not include the number of those wounded during the incursions into the West Bank.) It should be mentioned that PCHR keeps the names of wounded persons for fear of arresting them. The demonstrations were as follows: