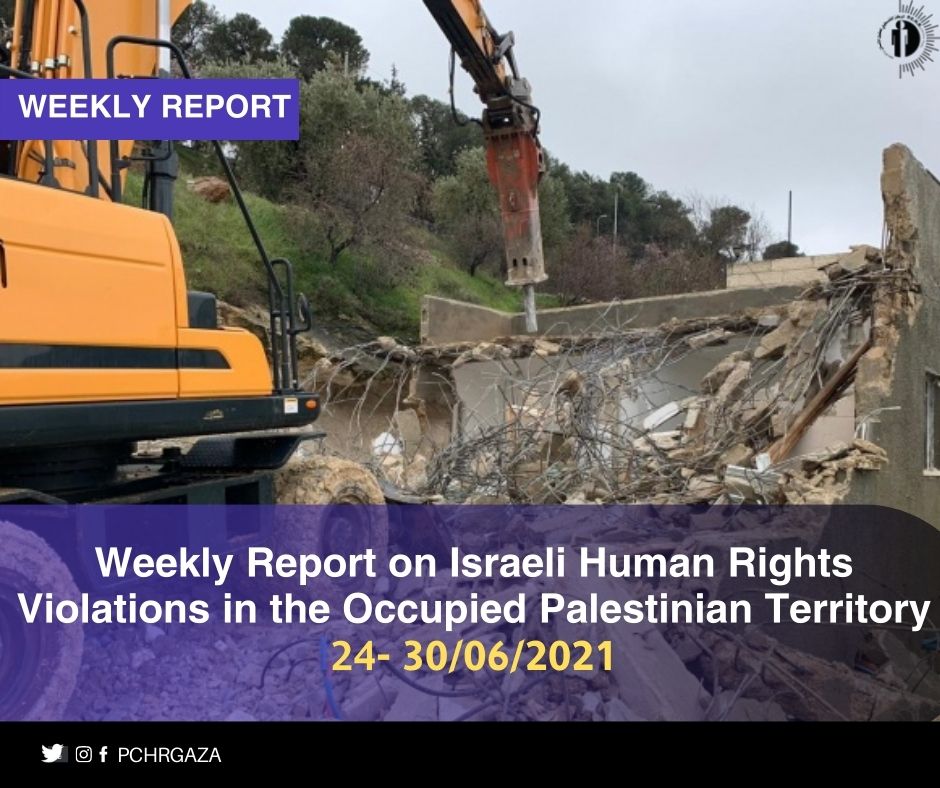 Israeli forces continued to commit crimes and multi-layered violations against Palestinian civilians and their properties, including raids into Palestinian cities that are characterized with excessive use of force, assault, abuse and attacks on civilians, turning the West Bank into isolated blocks of land. Israeli settlement expansion on Palestinian properties and land continued. Meanwhile, the Gaza Strip enters its 15th year under closure, exacerbating the humanitarian hardships across the territory.

Israeli Forces shooting and violation of right to bodily integrity:

In the Gaza Strip, one shooting incident by the army was reported against agricultural lands in eastern Rafah.

The army carried out 121 incursions into the occupied West Bank. Those incursions included raids of civilian houses and shootings, enticing fear among civilians, and attacking many of them. During this week’s incursions, 80 Palestinians were arrested, including 9 children and two sisters. During these raids, Israeli forces stole money from at least two houses, including a journalist’s.

East Jerusalem: a room self-demolished; commercial facility and a house demolished in Silwan.

Hebron: cease-construction notice served against a school in Yatta, and two tin-plated houses dismantled in Dahiriyia.

Bethlehem: 4 demolition notices served against 4 houses in Walaja and Kisan.

PCHR fieldworkers reported and documented 5 attacks by Israeli settlers on Palestinian civilians and their properties:

The Israeli authorities continued to impose collective punishments against the people of the Gaza Strip by closing Karm Abu Salem and Beit Hanoun “Erez” Crossings (with partial operation).

On Thursday, 24 June 2021, IOF expanded the fishing area in the Gaza Sea to 9 nautical miles after it was limited to 6 (allowed fishing area was 15 nautical miles before the aggression) after the aggression. IOF also announced superficial facilitations on the restriction on the import of goods to Gaza, as some raw materials used exclusively for civilian objects were allowed entry.

Meanwhile, the authorities continued to divide the West Bank into separate cantons with key roads blocked by the Israeli occupation since the Second Intifada and with temporary and permanent checkpoints, where civilian movement is restricted, and they are subject to arrest.

“A large Israeli force stormed our 2-storey house, where Mohammed is furnishing the ground floor to get married, and the rest of the family is living in the upper floor. The Israeli soldiers stormed Mohammed’s apartment, damaged its contents, and then they headed to our house and completely destroyed all the house’s contents, and my 2 brothers were blindfolded and arrested. After the withdrawal, I saw my sister’s bag which contained a (10,000 NIS) for university premiums, was thrown empty in the kitchen, and the money was stolen.”

“At approximately 08:00, my neighbors called to tell me that IOF’s bulldozers were demolishing my house. Amonth ago, I received a demolition notice giving me 96 hours to appeal, which coincided Thursday that means it is impossible to do anything within the 96 hours. On Sunday, I went to obtain a precautionary paper for stopping the demolition, but they told me I cannot have this paper and asked for more papers to stop the demolition. I gave them all the needed papers and the officer called me later to tell me that the demolition was cancelled and I can continue building. However, I was surprised today with the bulldozers carrying out the demolition. I called the governorate, which told me to contact the Liaison but the bulldozers were almost done. I also planted the area with 450 olive trees but was ordered to return the land as it was before or the trees will be uprooted. I do not what to do now as I am originally from Yatta in Hebron and intended to live here where I work.”

b. Israeli Settler attacks on Palestinian civilians and their property