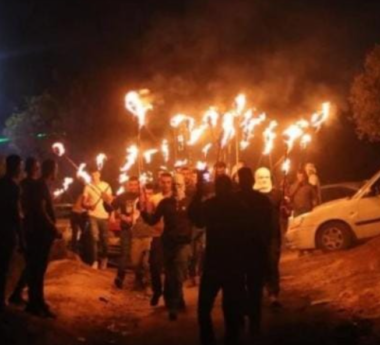 Ahmad Jibril, the head of the Emergency Department of the Palestinian Red Crescent Society (PRCS) in Nablus, said Israeli soldiers fired a barrage of gas bombs, concussion grenades, and rubber-coated steel bullets at the protesters.

He added that six Palestinians were shot with the rubber-coated steel bullets, and 55 suffered the effects of tear gas inhalation.

Local sources said the Palestinians reopened many roads that were blockaded by the soldiers to prevent them from reaching their lands in Sbeih Mountain before the soldiers assaulted them and fired the gas bombs, concussion grenades, and rubber-coated steel bullets at them before the residents started hurling stones at the soldiers.

There were marching while holding Palestinian flags, torches, and were chanting for ongoing struggle until liberation and independence and the removal of Israel’s illegal colonies.

The Palestinians hold nightly protests on their lands in Sbeih mountain after the illegal Israeli colonialist settlers occupied its rooftop and installed an outpost in early May of this year.