After 58 Days Of Hunger Strike, Israel Refuses To Transfer Detainee To Palestinian Hospital 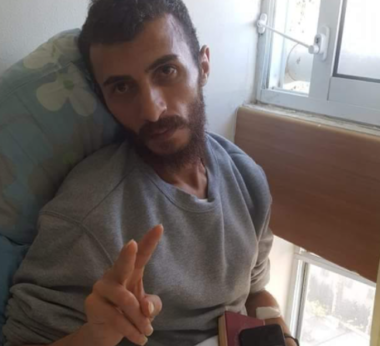 Attorney Jawad Boulos of the Palestinian Prisoner’s Society (PPS) stated, Thursday, that the Israeli authorities are refusing to release a Palestinian detainee, identified as Ghadanfar Abu Atwan, 28, who entered the 58th day of the hunger strike, to a Palestinian hospital despite a ruling from the Israeli Supreme Court suspending the arbitrary Administrative Detention orders against him, holding him captive without charges or trial.

Boulos stated that the ruling was not a surprise but is another proof that the Israeli occupation authorities are proving once again that even rulings by the Supreme Court cannot be trusted, especially since the court ordered the suspension of the Administrative Detention order without voiding it.

He added that Atwan, who is currently at an Israeli medical center, is still refusing medical treatment, and is demanding to be released to receive the needed treatment at a Palestinian hospital.

The PPS said that Atwan is facing a serious health deterioration, and could face further complications, including paralysis and other conditions that could impact his heart, liver, and other vital organs, and could lead to his death.

Boulus said that, while the Israeli Supreme Court ordered the suspension of the Administrative Detention orders against al-Ghadanfar due to his serious health condition as stated by reports from Kaplan Israeli medical center, the fact remains that these orders have not been voided, but only frozen.

“This means that Israel is trying to turn him into an ‘unofficially imprisoned Palestinian’, who would remain at the medical center, but stays imprisoned by the security personnel of the medical center instead of the soldiers,” Boulos said, “This also means that he is still a political prisoner, and his family cannot move him anywhere, let alone to a Palestinian hospital, although they can visit with him.”

“This ruling seems to be a ‘new invention of the Israeli legal system,’ supported by the Supreme Court, to vacate their responsibility for anything that might happen to the detainee, including death,” Boulos added, “Although he is not allowed to go home or anywhere else, Israel now can claim he is just a patient receiving treatment.”

The lawyer added that the Israeli judges said in their decision, Thursday, that once the detainee regains his health and his condition improves, the Israeli prosecution and security agency still “have the right to renew the Administrative Detention orders against him.”

It is worth mentioning that Abu Atwan, from Doura town south of the southern West Bank city of Hebron, is also a former political prisoner, who was repeatedly abducted and imprisoned by Israel and held a hunger strike in the year 2019 protesting the arbitrary Administrative Detention orders.

In related news, detainee Jamal Tawil, 59, continues a hunger strike he started 29 days ago, protesting the abduction and imprisonment of his daughter, Bushra Tawil.

Bushra, a Palestinian journalist, is also held under the Administrative Detention orders.

It is worth mentioning that Bushra was only able to see her father for 53 days over the last nine years due to his and her repeated abduction and imprisonment by Israel.

Bushra was first taken prisoner in the year 2011 when she was only 18 years of age, and was released under the Shalit prisoner swap deal, but was later abducted and imprisoned several times, including being held under Administrative Detention orders four times, including when she was held for seven months without charges.