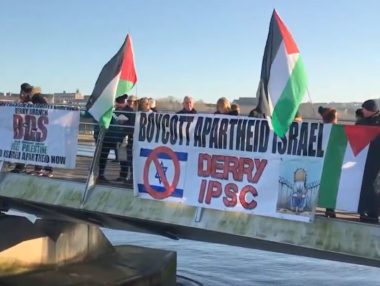 By Niall Ó Brolcháin – IMEMC News: The Derry branch of the Ireland-Palestine Solidarity Campaign (IPSC) held their annual New Year’s Eve vigil on Tuesday, December 31, 2019, on Derry’s famous Peace Bridge to stand in solidarity with their Palestinian brothers and sisters in their fight for freedom, justice, and equality.

This was the third year the vigil has taken place and attracted the largest attendance to date with visitors to the city from Mexico even taking part.

The IPSC called on people to come out and show their support in commemoration of the 11th anniversary of the Israeli ‘Operation Cast Lead’ attack on Gaza and to highlight Israel’s ongoing brutality coupled with the cruel and illegal siege of Gaza and occupied West Bank.

“Today we join other cities around Ireland in solidarity with Palestine to reaffirm our commitment to the Palestinian people to keep working  for freedom, justice and the right to return to their land. At the forefront of our efforts is the ending of the almost 12-year brutal siege of Gaza and the approximate 1.2 million people imprisoned there aided and abetted by  Egypt. 2020 is the year the UN said that Gaza would become unliveable. That prediction is already a dire reality for the people of Gaza.”

During “Cast Lead’s” 22-day military offensive on the Gaza Strip, between 2008 and 2009 Israeli soldiers killed more than 1,400 Palestinians, including 340 children.