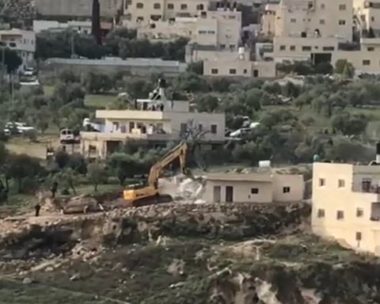 Khaled Abu Tayeh, a member of the Follow-Up Committee in Silwan, said dozens of soldiers and personnel of the Jerusalem Municipality, invaded the town, before surrounding the two flats.

Abu Tayeh added that the soldiers demolished the two flats, 100 square/meters each, owned by Yazid Khalayla and his brother Mohannad.

The army claimed the flats were built without construction permits.The Wadi Hilweh Information Center in Silwan (Silwanic) said the family managed to obtain court order halting the demolition, but the army went ahead and demolished the property anyway.