Permit for Annual March of Return Rejected by Israeli Police 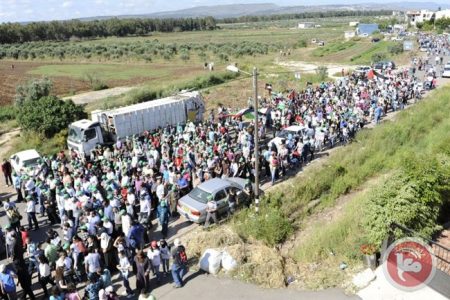 Israeli police have refused to grant a permit for the annual March of Return, this year, organized by Palestinians to commemorate the Nakba, or “catastrophe,” alongside Israeli Independence Day, Israeli media has reported.

According to Haaretz, Israeli police claimed that the event was refused due to inability to provide police presence necessary for a march expected to be attended by 25,000 Palestinian citizens of Israel and their supporters, saying that “it’s unfortunate that the organizers decided to conduct the march exactly on the day of Independence Day, when there are hundreds of approved events throughout the country.”

The march, which has been held for 18 consecutive years, is aimed at highlighting the internationally-recognized right of Palestinians who remain refugees or internally displaced to return to their homes and villages in Israel, a right which is upheld in United Nations Resolution 194.

Each year, the march is launched from a site of a Palestinian village destroyed by Israeli forces in 1948, Ma’an News Agency reports.

Muhammad Bassam, an attorney from the Israeli rights group Adalah, reportedly said that if the permit for the march was not granted by Israeli police, the group would appeal to Israel’s Supreme Court. “The police decision is very strange and raises concerns that the refusal to approve the event is politically motivated,” he said.

Others pointed out to Haaretz that the organizers had already discussed the march with local police in the Israeli coastal city of Nahariya, in order to launch the march from the destroyed Palestinian village of al-Kabri.

The Nahariya police had toured the planned route of the march two weeks prior, Haaretz reported, with the police already setting the police requirements for the march, leading some to suspect that the permit rejection was politically motivated.

The March of Return is usually held on Israeli Independence Day to commemorate the Nakba, referring to the mass expulsion of Palestinians from their homes and villages during the 1948 Arab-Israeli war that established the state of Israel.

The official commemoration of the Nakba is held on May 15th, and is observed by millions of Palestinians and rights activists around the world.

Some 750,000 Palestinians were expelled from their lands in 1948 and were scattered across refugee camps in the occupied West Bank, the Gaza Strip, Jordan, Lebanon, and Syria, according to the United Nations Relief and Works Agency (UNRWA). Today, there are over five million Palestinian refugees who remain displaced from their original homes and villages, following the mass expulsion that occurred almost 70 years ago.