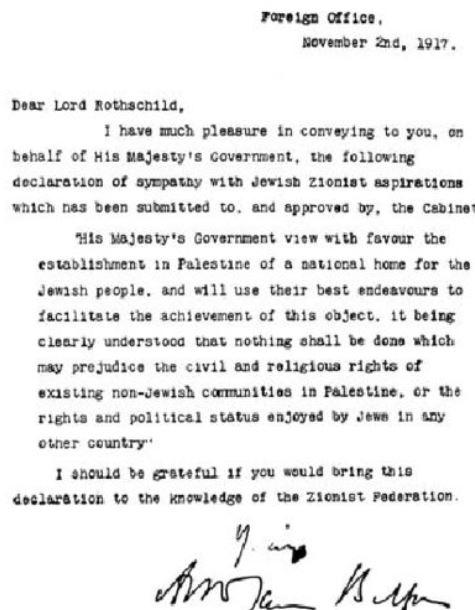 More than 11,000 people have signed a petition calling on the British government to apologize for the Balfour Declaration, when, one century, ago then Foreign Secretary Arthur Balfour promised a homeland for the Jews, in Palestine, at the expense of its indigenous Arab population, the London-based Palestinian Return Center (PRC) said, on Wednesday.

“We call on Her Majesty’s Government to openly apologise to the Palestinian people for issuing the Balfour Declaration. The colonial policy of Britain between 1917-1948 led to mass displacement of the Palestinian nation,” read the petition, according to WAFA correspondence.

“HMG should recognize its role during the Mandate and now must lead attempts to reach a solution that ensures justice for the Palestinian people,” it added.

Tareq Hammoud, PRC executive director, said that by reaching this figure, the campaign is clearly taking a more popular course.

“When 10,000 Britons ask their government to apologize for the Balfour declaration, it is an indication of a significant shift in public opinion over the past decade in favor of the Palestinian cause,” he said, explaining that the number of signatures has reached 10,000 over the weekend and went up to 11,613 by Tuesday.

The organizers are aiming at 100,000 signatures, which mean the petition will be considered for debate in the parliament.

10/27/16 One Hundred Years and Counting: Britain, Balfour, and the Cultural Repression of Palestinians