PFLP: “Delaying Kayed’s Court Session Until October 5th, A Decision To Assassinate Him” 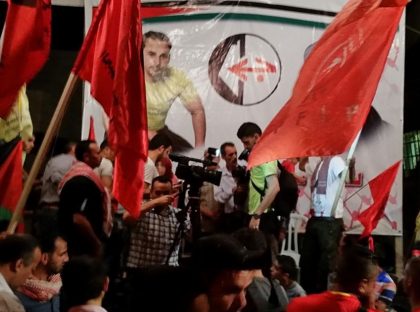 The Popular Front for the Liberation of Palestine (PFLP) issued a statement condemning the Israeli decision to hold a court session for hunger striking detainee, Bilal Kayed, on October 5th 2015, and considered it an official decision to execute the detainee, who is ongoing with the hunger strike for the 58th consecutive day.

The PFLP said that this decision is an official execution and assassination attempt targeting Kayed, and called for massive protests in support of the detainee on the local, regional and international levels.

It held Israel fully responsible for the consequences of this decision, especially since the Israeli court knows that Kayed started the hunger strike 58 days ago, demanding his release, and added that Israel is holding the detainee while cuffed to his hospital bed despite his deteriorating health condition.

In its statement, the PFLP said the Israeli occupation courts are immoral and illegal, “and only show the true racist face of this occupation,” and denounced the Israeli policies of holding hundreds of detainees under arbitrary Administrative Detention orders, without charges, in direct violation of International Law and the Fourth Geneva Convention.

It added that the threat to Kayed’s life is very serious, and is part of Israel’s illegal policies and ongoing violations against the Palestinian people.

It is worth mentioning that Kayed served a prison sentence of nearly 15 years, and started his strike after Israel decided to place him under Administrative Detention instead of releasing him.