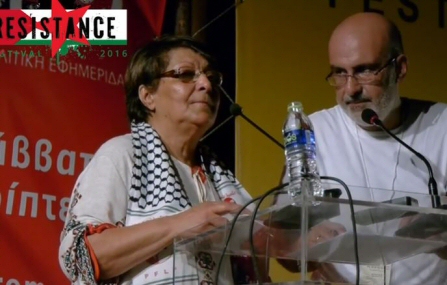 Leila Khaled stressed the collective history of resistance and mutual solidarity between the people of Palestine and Greece. Among others, she underpinned, solidarity at the time when Greece was governed by a military dictatorship. Khaled spoke alongside Figen Yuksekdag of the HDP of Turkey, Deborah Santana of the Puerto Rican liberation movement, and Marina Brescia of the Resistance Festival organizing committee.

Khaled highlighted in particular the struggle of political prisoners, focusing on the hunger strike of Bilal Kayed and carrying greetings from PFLP General Secretary Ahmad Sa’adat to the festival. She described Kayed’s imprisonment for 14 and one-half years, followed by an order of administrative detention against him, urging global mobilization for political prisoners and saluting the struggles of her fellow speakers, calling for freedom for Puerto Rican, Turkish and Kurdish prisoners, and international revolutionary prisoners.

Leila Khaled also denounced the current Greek government’s actions to build a closer relationship with the Zionist occupation as well as its concessions to European powers when SYRIZA was elected by the Greek people to reject these forces. She particularly highlighted the government’s pursuit of natural gas deals with the occupier, noting that such deals were based on the profiteering and plundering from stolen Palestinian gas, and only pose further threats of exploitation to the Greek people.

Khaled met several prominent Greek political figures, including Zoe Konstantopoulou, former Speaker of the Greek Parliament, where she emphasized the need to build stronger mutual solidarity to confront the forces of imperialism and colonialism that threaten the Palestinian and Greek people. She met with Member of European Parliament Sofia Sakorafa, former Olympic athlete and a longtime supporter of the Palestinian people, emphasizing the importance of supporting Palestinian political prisoners and the Palestinian struggle for liberation.

Khaled also presented before a political forum at the Agricultural University of Athens before hundreds of activists and cadres of Greek progressive political forces, emphasizing the importance of the boycott, divestment and sanctions campaign and the need to cut off all forms of political, economic, military, and academic cooperation between Greece and the Zionist state.

Khaled’s visit came despite various attempts and pressures exerted by the Israeli embassy in Athens against the visit of Leila Khaled and attempts to cancel her events, threaten her personally, and silence her speeches. The Greek leftist forces with which she met emphasized their commitment to stand with the Palestinian people and their resistance for return and liberation.