Army Injures A Solidarity Activist, Detains 2 Photojournalists And One Medic, In Kufur Qaddoum 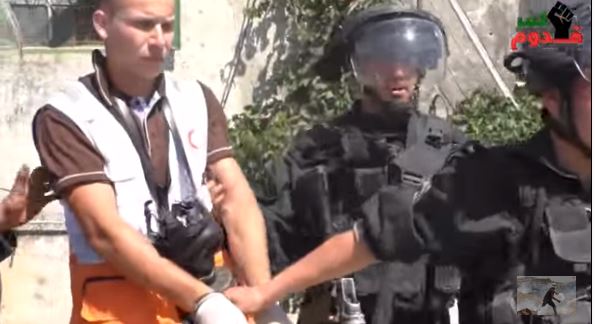 Israeli soldiers attacked, Friday, the weekly protest against the Annexation Wall and colonies in Kufur Qaddoum town, near the northern West Bank city of Qalandia, shot and injured an international solidarity activist, while many protesters suffered the effects of tear gas inhalation. The soldiers also detained two photojournalists and a medic.

Morad Eshteiwy, the coordinator of the Popular Committee in Kufur Qaddoum, said the soldiers invaded the town during morning hours, and fired dozens of gas bombs and concussion grenades, in an attempt to prevent the residents from holding their weekly protest. The Palestinians and international solidarity activists managed to march from the center of the village, before a soldier, who was hiding in one of the homes, fired live rounds, wounding a solidarity activist with a bullet in his right thigh.

The activist, who requested to remain anonymous, was moved to the Rafidia governmental hospital, in Nablus.

The soldiers also detained two Palestinian photojournalists, identified as Mahmoud Fawzi and Kamel al-Qaddoumi, and a Red Crescent medic, identified as Sami Jom’a. The three were held for three hours before the soldiers released them.

Clashes also took place in the town after the soldiers invaded it and fired on the protesters, causing many to suffer the effects of tear gas inhalation. Local youths hurled stones at the military vehicles, while the soldiers fired dozens of gas bombs, live rounds, and rubber-coated steel bullets.