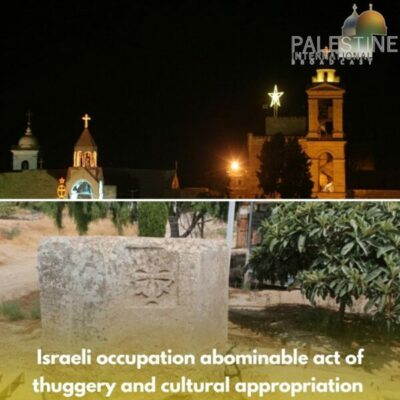 “Israel’s theft of a baptismal font dating back to the Byzantine era from Bethlehem, overnight Sunday, is an abominable act of thuggery and cultural appropriation,”

– Dr. Hanan Ashrawi, in a press release, on Monday

She appealed to the international community, in particular the United Nations Educational, Scientific and Cultural Organization (UNESCO), to hold Israel accountable for its theft of Palestinian heritage.

The rare stone-made, baptismal font, according to the Palestine International Broadcast, dates back to the fifth or sixth century A.D., and was stolen from Teqoua’ town, in the southern occupied West Bank.

A documentary prepared by Jerusalem’s Christian Media Center reveals that the rosy font, weighing approximately eight tons, was part of a local Byzantine-era church in the ancient town of Teqoua’.

“Israel continues to use its position as the administrator of archaeological sites in the West Bank as a means to deepen its control over West Bank land, to expand the settlement enterprise, and extend the policy of dispossession of Palestinians from their lands and cultural assets. Although the takeover of land through archaeology is not the main method of achieving Israeli control over land, it is significant because of its symbolic aspects and impact on public awareness.”