PLO: Solidarity with Palestinians not Just an Abstract Expression of Empathy 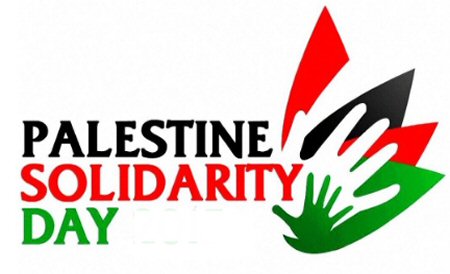 Palestine Liberation Organization (PLO) Executive Committee Member Dr. Hanan Ashrawi said, while marking the International Day of Solidarity with the Palestinian People that coincided on Thursday, that solidarity is not just an abstract expression of empathy; rather, it is an active, positive and concrete engagement.

“On November 29, 1947, the United Nations General Assembly (UNGA) adopted Resolution 181 (II).  Following the international community’s decision to adopt the Partition Plan, the suffering, dispossession, displacement, and victimization of the Palestinian people commenced as the state of Israel was established on the land of historical Palestine,” said Ashrawi in a statement.

“Seventy-one years later, the longest occupation in modern history persists while Israel continues to implement an official policy of unlawful unilateralism with a total disdain for international law and Palestinian human rights; such criminal behavior includes Israel’s illegal settlement enterprise, its expropriation of Palestinian land and resources, the deliberate targeting of peaceful protestors in the besieged Gaza Strip, the cultural, historical, demographic, and territorial distortion of Jerusalem, and the eviction and deportation of Palestinians from their homes and land, among other violations.  Such Israeli measures, which have been emboldened by the current US administration’s disastrous moves and decision-making, constitute a total negation of the most basic requirements for peace, stability and security.”

Ashrawi added, “Today also marks the forty-first anniversary of the UNGA’s designation of November 29 as the International Day of Solidarity with the Palestinian People.  On this occasion, we extend our gratitude to the individual governments and parliaments worldwide that have recognized us, as well as the political parties, representatives of civil society, churches, solidarity and BDS (Boycott, Divestment and Sanctions) groups, and others who have worked tirelessly in the service of the cause of a just peace and in defense of the Palestinians, a people in captivity and exile, and their right to live in freedom and dignity.”

However, stressed the PLO official, “Solidarity is not just an abstract expression of empathy; rather, it is an active, positive and concrete engagement. It should send a strong and important message to both the Palestinian people and to the global community that there is a price to be paid for Israel’s persistent violations of international law and conventions. Simultaneously, it would be assuring the Palestinian people of the protection available to them in the international legal and political system. The injustice which began in 1948 must come to end.”