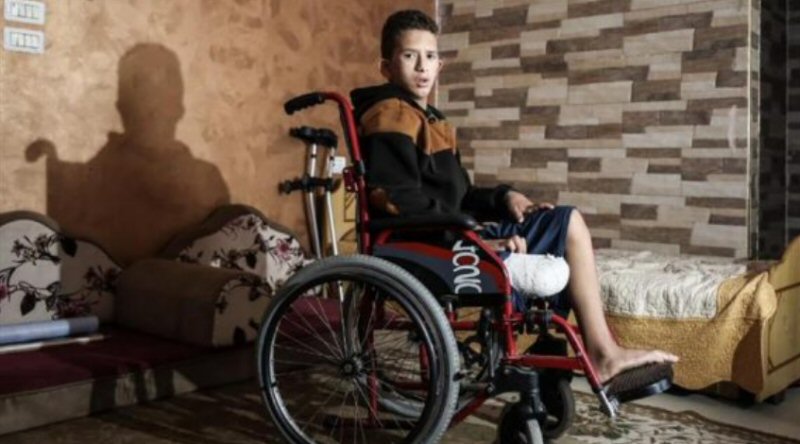 Muhammad Jasser Barbakh no longer dreams of owning a bicycle or kicking a ball, or even going back to the school that he had left to help support his poor family. His big wish these days is simply to be able to leave his bed to play with his peers.

The Palestinian boy, who is not yet 14 years old, was shot on 26 October by an Israeli sniper while taking part in the Great March of Return protests on the nominal border of the Gaza Strip. His right leg has since been amputated and he has nightmares about what happened to him, so much so that he fears to fall asleep. “I did nothing to harm the Israeli occupation,” he explains. “I only raised a Palestinian flag.”

Six other Palestinians were killed on the day that Muhammad was shot near the eastern edge of Khan Younis. He was one of the dozens who were wounded, victims of Israel’s decision to use live ammunition against unarmed protesters.

Sitting in his wheelchair with a pair of crutches beside him, young Muhammad recalled what happened on that fateful day. “I took part in the Marches of Return to demand my right to live in dignity in my country. On the 31st Friday of the protests, I was shot by the occupation forces. I was carrying a flag and running in between the protesters. I did nothing that might harm the Israeli soldiers.”

The boy did not expect to be targeted by the snipers who shot him. “But I was, and when I was shot I fell to the ground. A young man crawled over and tried to help me. I later learned that he was also shot and martyred next to me. We were taken to an ambulance together.”

After treatment at a local hospital, Muhammad was transferred to Al-Makassed Hospital in occupied Jerusalem. His leg could not be saved.

“I do not know what I have done to deserve this. What will I do now that my leg has been amputated? What crime did I commit that made the occupation soldiers shoot me?”

These are big questions for a 14-year-old boy to ask, never mind the answer. For the time being, he depends on painkillers, which make clear thinking difficult.

“After leaving school, I used to play with my friends and go out in the morning with my father to the market to help him sell trinkets. However, now I can’t even get out of bed without help, and I spend all day at home.”

Although he hopes to get a prosthetic leg, Muhammad’s family can’t really afford one. His father’s income is barely enough to meet his family’s basic needs.

According to his mother, Majidah, 40, the boy doesn’t have any peaceful sleep. “He has been in pain since he was shot, and we do not know the solution for this. I suffer and die a thousand times a day when I look at him and feel that I cannot do anything.” Her child’s life, she cries, is ruined. “What did my son do to make a soldier shoot him? How did he deserve this?”

She was worried about Muhammad taking part in the protests even though, as far as she is concerned, he used to go every Friday to have fun with his friends and schoolmates. She insists that he posed no threat to the Israeli soldiers. “When I asked him one day not to go, he insisted and told me he does not approach the border fence.”

Muhammad’s mother heard that he had been “slightly injured” when she received a phone call from an unknown person. “However, when I went to the hospital, I was told that the bullet had shattered the main artery, veins and nerves in his leg.”

When he was transferred to Al-Makassed Hospital, she added, hope faded away. Muhammad is but one of the 18,000 Palestinians who have been wounded by Israeli soldiers since the protests started on 31 March. At least 214 have been killed in the same period. Nobody is ever likely to be brought to account for shooting the unarmed 14-year-old boy carrying a flag.