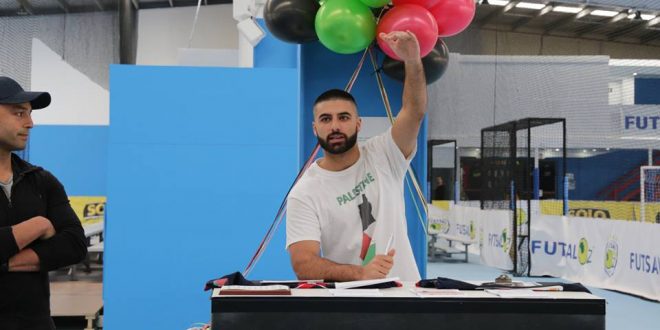 Through this campaign, Nadeem wanted to gather sponsors, players and members of the community, to raise their awareness to the reality of the struggle in Palestine, and get them involved through the sport spectacle, to donate for the cause.

PNN held an interview with Nadeem, who is currently in Australia, to know more about him and his campaign in Palestine…

– How old are you and what do you do?
I’m 20 years’ old, I study [for a] double degree in Law and International Relations. I play senior soccer within the “State 1” Victorian Division in Australia, and I also coach soccer & Futsal at my old high school.

I was fortunate enough to visit Palestine in July, 2016, and I instantly felt the strength of the sense of identity. While I always follow the situation in Palestine through the media and the news channels, being confronted with the reality of the situation, seeing, feeling and interacting with my fellow Palestinian has expanded my horizon of knowledge, and my appreciation grew towards the magnitude of the struggle and the mental fight to continue living and surviving. My visit to Aida Refugee Camp was a true eye-opener. The Camp is situated 2 kilometers north of the historic center of Bethlehem and 1 kilometer north of Beit Jala, in the central West Bank and neighboring the Apartheid Wall. I was monitoring and observing the standards of living of those within the camp. The schooling facilities are quite poor, and the structure of many buildings around the camp are in poor condition. I met many of the leaders in the camp, the youth and the children. They shared their stories of struggle, and they highlighted to me how a small avenue of help would go along away for the youth and the children in the camp. I made a commitment that, upon my return back to Australia, I would actively seek support and assistance for my fellow Palestinians at the camp and ensure that the help find its way to the youth and the children in the camp. I refused to be a tourist who would just visit Palestine to take snap shots, show sympathy and, then, go back home and continue living my life — while I know quite well that I could have done something to make the life of the people I met back in Palestine a little bit easie,r and a little bit more tolerable.

– Tell us about the league that you organized, and what is the main goal of having it?
Upon my return from Palestine, I decided to organize the annual Futsal competition, in October 2016, in order to raise funds for the Palestinian children in Palestine. The main goal of organizing this Futsal tournament is [to] gather sponsors, players and members of the community, share with them my experience, and raise their awareness to the reality of the struggle in the camp (as well as other part of Palestine), and get them involved through the sport spectacle to donate for the cause. Futsal is a very popular sport within the Palestinian community, in Melbourne-Australia, and the youth of our community have been playing this game as a formal tournament for the past 4 years.

– Who are the teams? What was your message of the league?
We have 6 teams; each team has 7 to 8 players. The teams are:
Aida United FC (my team, which I captain)
Gaza FC
Al-Lyd Fussball Bund
Gaza Warriors
Ariha RSG
Jerusalem FC

The purpose of Season 4 of the Futsal League is to raise funds for the Palestinian children at Aida Refugee Camp. Our goal is to Raise Australian $10,000 for the camp.

It was deliberate that each team’s name represented a city, village or camp in Palestine, to ensure that there is always a connection between the Palestinian in Palestine and the Palestinian abroad, and to also retain the knowledge, sense of identity and culture for our younger generations living outside of Palestine.
The captain of each of the teams is a Palestinian-Australian. 2 captains from Gaza, 1 from Al-Lyd, and one from Jerusalem. We have also incorporated many other nationalities into our tournament, who are supportive of the Palestinian cause. For example, players from Saudi Arabia who are studying in Australia, and many other Australian citizens who’ve come from different origins, like Lebanon, Somalia, Turkey, Greece and others.
I chose to name my team “Aida United FC” due to the real connection I have established with many of the youth, leaders and children at the camp. I wanted to represent them and be their ambassador through the sport of Futsal. I wanted them to follow the action of our tournament and be proud to see the “Aida Team” placed top in the tournament ladder.

– Were there any Palestinian associations cooperating in the event?
The PCA, which is the Palestinian Community Association of Victoria, it’s mission of engaging the Palestinian community with the wider Australian society, while maintaining and promoting our Palestinian identity. Also, Olive Kids Foundation, which is an Australian registered foundation that seeks to facilitate financial support, education & medical assistance to Palestinian children.

– What is your word to the Palestinian people as a diasporic youth, and your word as a team?
As Palestinians living abroad and away from our home land, we all have a duty of care and obligation to remain connected to our land, our cause, our history and our people. We all have the responsibility to raise awareness about the reality of the life, that Palestinians live in Palestine, with great focus on the repeated abuse of human right[s] and the injustice imposed on this population. Yes, the problem it [is] too complex to resolve, and we do not need to, certainly, resolve in one day! But, any small contribution, with its financial, emotional support, media advocacy, and with greater focus on improving the day-to-day life of Palestinian children, we will make a positive impact.
I did it, and will continue to do it, and [so] should you!
I also believe that direct contact with those in need, in Palestine, is the most important form of assistance, and I also believe that the gift of education is critical in order to empower the future generations of Palestinians, to continue to re-build and prosper.

Also in IMEMC Interviews — A Change of Course: Women’s Boat to Gaza Activists Speak Out, Following their Release from Israeli Custody

Palestinian Injured After Losing Control of Vehicle at Checkpoint