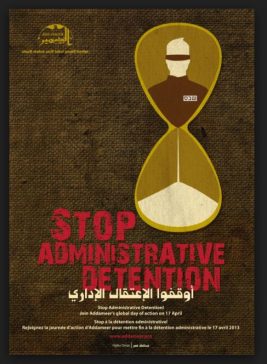 The Palestinian Prisoners Society (PPS) has reported that the Israeli Authorities imprisoned 647 Palestinians under arbitrary Administrative Detention order, without charges, since October 1, 2015.

The PPS said that the current number of Palestinian detainees, held under Administrative Detention orders, is 750, and that this is first the number reached this level since 2008.

It also said that most of these orders were made by the Ofer Israeli military court, north of Ramallah, in the occupied West Bank.

The PPS said such orders witnessed a sharp rise after Israel’s Prime Minister, Benjamin Netanyahu, instructed the military to escalate this policy, as part of the collective punishment measures issued against the Palestinians.