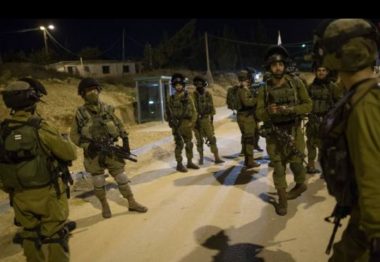 The Palestinian Prisoners Society (PPS) has reported that Israeli soldiers have abducted, during massive invasions of homes, on Wednesday at dawn, at least fifteen Palestinians, from different parts of the occupied West Bank.

In the southern West Bank district of Hebron, the soldiers invaded and ransacked several homes in Beit Ummar town, north of the Hebron city, and abducted six Palestinians, including a child.

Furthermore, the soldiers abducted two Palestinians from ‘Aqaba town, in Tubas, during violent invasions and searches of homes.

The two Palestinians have been identified as Amro Ahmad al-Masri, 24, who is also a student of the Al-Quds Open University, and Salah Yassin Ghannam, 23.

In Nablus, in the northern part of the West Bank, the soldiers invaded and searched homes, before abducting Nadeem Nazeeh Ismael, from Beit Dajan town, east of the city, and Omar Raslan Qandeel, from Balata refugee camp.