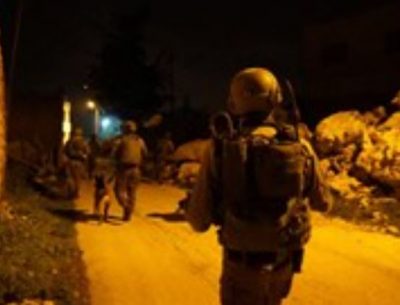 The Palestinian Prisoners’ Society (PPS) has reported that Israeli soldiers abducted, on Monday at dawn, at least thirty Palestinians in different parts of the occupied West Bank, including seventeen in the al-‘Isawiyya town, in East Jerusalem.

Owners of some of the invaded homes have been identified as Yousef Ali Awad, Abdul-Athim Qaisiyya and Hasan Khalil Awwad.

Medical sources said one Palestinian, identified as Wi’am Hannoun, suffered moderate-to-severe wounds when the soldiers shot him with live rounds in his leg, after the army opened fire on Palestinians, protesting the invasion into Jenin refugee camp.

In Bethlehem, the soldiers abducted two Palestinians from Doha town; one of them has been identified as Mohammad Hasan Ajamiyya.

In occupied Jerusalem, dozens of soldiers and security officers invaded the al-‘Isawiyya town, surrounded its neighborhoods, and violently searched dozens of homes before abducting seventeen Palestinians.

Also in al-‘Isawiyya, the soldiers summoned Ahmad Yousef Obeid and Sufian Mahmoud, for interrogation at a military base in occupied Jerusalem.

Mohammad Abu al-Hummus, a member of the Follow-up Committee in al-‘Isawiyya, said the town has been subject to daily invasions and violent searches of homes, cars and stores, while police officers also ticketed dozens of Palestinians without any cause or reason.

The soldiers also removed the protest tent that was installed in solidarity with the hunger striking detainees in Israeli prisons, installed many roadblocks, and have been occupying many rooftops, using them as monitoring towers and firing posts.

In addition, several army jeeps invaded Aseera ash-Shemaliyya town, north of Nablus, in the northern part of the West Bank, before the soldiers searched homes and abducted Mo’men Sabah, while another Palestinian, identified as Osama Yameen, was abducted from his home in Tal village, southwest of Nablus. Both abducted Palestinians are students of the Najah National University, in Nablus city.

Furthermore, the soldiers invaded and searched homes in the al-‘Ein refugee camp, west of Nablus, and abducted Rabea’ Khaled.