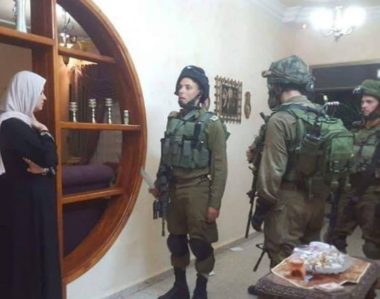 Updated: The Palestinian Prisoners’ Society (PPS) has confirmed that Israeli soldiers abducted, on Monday at dawn, twenty-one Palestinians from their homes, in several parts of the occupied West Bank.

In Occupied Jerusalem, the soldiers abducted Mahmoud Abul-Latif, 28, from his home in the Old City.

Abdul-Latif is a former political prisoner who was also banned from entering the Al-Aqsa Mosque several times, for protesting repeated invasion by the soldiers and colonialist settlers into the holy site’s compound.

The Jenin office of the PPS, in northern West Bank, said the soldiers invaded and searched homes in the city and in Jenin refugee camp, and interrogated many Palestinians, before abducting three Palestinians.

It stated that the soldiers abducted two young men, identified as Abdullah Sa’id Eghbariyya and Ahmad al-Bashar, from Jenin city, in addition to Mahmoud Ali Sa’adi, from Jenin refugee camp.

In Hebron governorate, in the southern part of the occupied West Bank, the soldiers searched many homes and abducted Mahdi Abdul-Jawad Bader, 36, and Rami Issa Ashour, 35, from Hebron city.

The army also abducted a child, identified as Wahid Samir ‘Aadi, from his home in Beit Ummar town, north of Hebron, in addition to Yasser Mohammad Rajoub, from Doura town, and Bader Mohammad al-Hawamda, from the as-Sammoa’ town, south of Hebron.

In Bethlehem, the soldiers abducted Ibrahim Hasan Issa, 14, Karim Mohammad Da’dou, 14, and a former political prisoner, Ahmad Ali Issa, 18, from their homes in the al-Khader town, south of the city.

Furthermore, the soldiers abducted a former political prisoner, identified as Ibrahim Hani Suman, 27, from his home in the Saff Street, in the center of Bethlehem city.

The soldiers also fired many gas bombs and concussion grenades at local youngsters, who protested the invasion in Beit Rima, and hurled stones at the military vehicles.