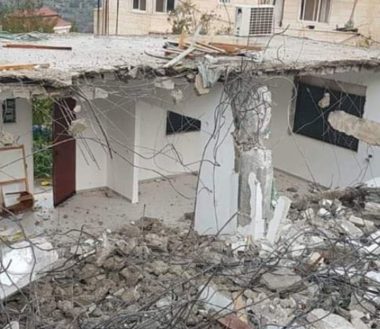 Israeli soldiers demolished, on Monday morning, a Palestinian home in the al-Walaja village, northwest of Bethlehem, in the occupied West Bank.

Dozens of soldiers, accompanied by bulldozers, invaded Ein Jweiza area in al-Walaja, after surrounding it, and proceeded to demolish the property.

The demolished home is owned by Majdi Shweiki, and was a 100 square/meter property, inhabited by five family members.

The Israeli army claims that the home was built without a license from the “Civil Administration Office,” the administrative branch of military occupation, as it is located in “Area C” of the West Bank.

Local nonviolent activist Ibrahim Awadallah said that Israel issued demolition orders against 180 homes in the village, including 40 homes that received “Administrative Demolition Orders,” which are issued without a court ruling.

Last year, the Jerusalem City Council announced the annexation of large areas of Palestinian lands, in order to build and expand its illegal, segregated colonies.