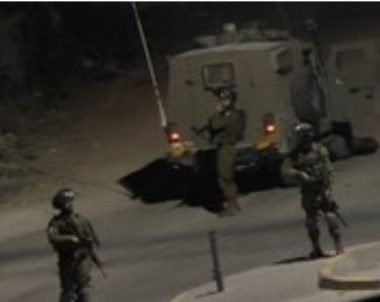 The Palestinian Prisoners’ Society (PPS) has reported that Israeli soldiers abducted, on Monday at dawn, at least eleven Palestinians from several parts of the occupied West Bank.

The PPS sad the soldiers invaded and ransacked dozens of homes, and interrogated many Palestinians, before abducting at least eleven.

It is worth mentioning that the soldiers also killed a Palestinian child, identified as Akram Tha’er Mizhir, 15, after shooting him with a live round in the chest, in the Deheishe refugee camp.

In related news, the Palestinian Health Ministry in Gaza has reported, on Monday at dawn, that a young man, identified as Karam Ibrahim Arafat, 26, died from serious wounds he suffered, on June 8th, after Israeli soldiers shot him with live fire.