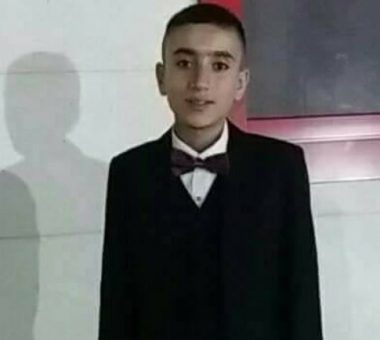 Dozens of Israeli soldiers invaded, on Monday at dawn, the Deheishe refugee camp, south of the West Bank city of Bethlehem, killed one child, injured two young men and caused dozens to suffer the effects of teargas inhalation.

They added that dozens of youngsters protested the invasion, and hurled stones at the soldiers, who fired many live rounds, rubber-coated steel bullets, gas bombs and concussion grenades.

Medical sources said the soldiers seriously injured Arkan Tha’er Mizhir, 15, after shooting him with a live round in the chest, before he was rushed Beit Jala (al-Hussein) Governmental Hospital, where he dies from his wounds.

The soldiers also shot two young men with live fire, and caused dozens of Palestinians to suffer the effects of teargas inhalation.

It is worth mentioning that the soldiers were extensively deployed in several areas of Bethlehem city, especially around the Deheishe refugee camp, before storming and searching many homes.