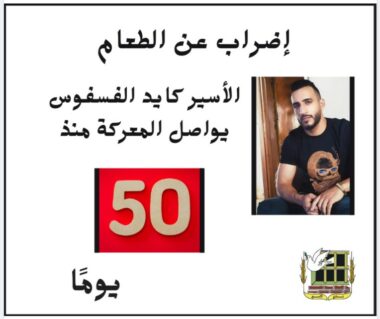 The Palestinian Prisoners’ Society (PPS) has reported, Sunday, that six Palestinian detainees are ongoing with the hunger strike, protesting their ongoing detention by the Israeli occupation authorities without charges or trial.

The PPS stated that the six detainees, held in various Israeli prisons under the arbitrary Administrative Detention orders without charges or trial, are ongoing with their hunger strike, despite deteriorating health conditions, demanding to be released.

It added that the detainees are subject to constant Israeli violations, including repeated transfers and solidarity confinement, to force them to end the strike without achieving their demands.

Detainees held under the Administrative Detention orders are imprisoned without charges or trial as Israel claims to have “secret files” against them, files that can never be released, and neither the detainees nor their lawyers have access to.

Such orders are frequently renewed for three, six, or eight months, and in some cases a year each time.

The detainees, ongoing with the hunger strike as of Sunday, September 5, are: