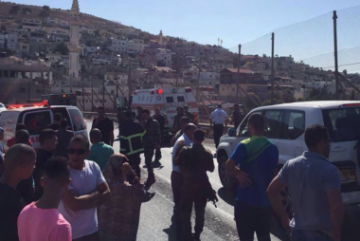 Palestinian medical sources have reported that a pregnant Palestinian woman was injured, Sunday, after an Israeli colonist’s car struck her near al-‘Arroub College, in the al-‘Arroub refugee camp, north of Hebron, in the southern part of the occupied West Bank.

The sources stated that the woman, Abeer Bassam Jawabra, 28, suffered various cuts and bruises, and was moved to the al-Mezan hospital, in Hebron. She was struck by the Israeli car at the main entrance of the refugee camp.

The woman, who suffered moderate wounds, is undergoing further examination and checkups, to ensure her well-being, and the well-being of her fetus.

On Sunday at dawn, the soldiers invaded Beit Ummar town, north of Hebron in the southern part of the occupied West bank, and abducted two Palestinian teenagers, including a former political prisoner.