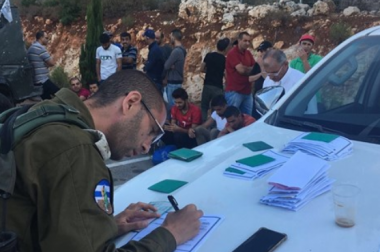 The soldiers abducted the workers, after chasing some of them, and moved them to several detention and interrogation centers.

The Israeli army said that the arrest of the Palestinian workers is part of “a campaign aimed at preventing them from entering the country without permits.”

The soldiers also abducted three Palestinians for “helping the workers in entering Israel without permits.”

In addition, the soldiers also confiscated 53 permits, carried by Palestinian workers who already obtained authorization from the Israeli side. The incidents took place near Etzion colony junction, and a military roadblock, west of Bethlehem.

On Sunday, A Palestinian worker from Bethlehem governorate, suffered fractures in both his legs, in addition to various cuts and bruises, after falling from a high altitude when Israeli soldiers chased him while he was trying to enter occupied East Jerusalem, where he works.

On Sunday morning, a pregnant Palestinian woman was injured, Sunday, after an Israeli colonist’s car struck her with his car, near al-‘Arroub College, in the al-‘Arroub refugee camp, north of Hebron, in the southern part of the occupied West Bank.

On Sunday at dawn, the soldiers invaded Beit Ummar town, north of Hebron in the southern part of the occupied West bank, and abducted two Palestinian teenagers, including a former political prisoner.