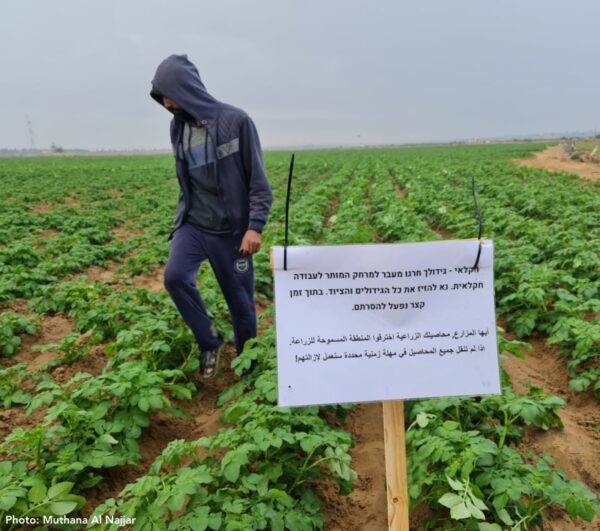 On Wednesday morning, 16 December 2020, Israeli military bulldozers crossed the perimeter fence into the Gaza Strip, east of Khan Younis, reaching up to 200 meters into agricultural lands in Abasan al-Kabira, Khuza’a, and al-Fukhari. For hours, Israeli troops razed and leveled Palestinian lands and crops—some of which had been prepared for planting—and eventually left placards written in both Arabic and Hebrew demanding that the Palestinian farmers uproot their crops in the area “within a certain time frame” otherwise the military “is going to remove them.”

During a similar incident on Thursday, 17 December 2020, farmers in the Rafah district also reported that they had found similar placards on their farmlands located 100 meters from the perimeter fence.

Israel, the Occupying Power, continues to carry out land incursions and to maintain its closure policy over the Gaza Strip even against the backdrop of the COVID-19 global health crisis and related concerns for the financial situation and food insecurity in the Strip, directly violating its obligation to protect the human rights of civilians in the occupied Gaza Strip.

These regular incursions and movement restrictions in the Israeli-imposed buffer zone in Gaza are not only life-threatening, but they also severely harm the livelihoods of thousands of Palestinian farmers. For instance, Israel periodically conducts aerial spraying of herbicides over Palestinian farmlands to destroy vegetation adjacent to the perimeter fence and has often employed lethal force to ward off farmers. At a time when families across the whole Gaza Strip are at higher risk of food insecurity and poverty, the impact of Israel’s relentless attacks on farmlands in the buffer zone has increased.

Al Mezan strongly condemns Israel’s targeting of Palestinian farmers and warns of the grave repercussions it has on their lives, most notably, the role such attacks play in stifling the Strip’s economic development and exacerbating the dire living conditions of Gaza’s population, especially during the pandemic.

Accordingly, Al Mezan calls on the international community to uphold its moral and legal obligations towards the Palestinian people by exerting pressure on Israel to cease all the attacks against Palestinian farmers and lift the blockade and closure unilaterally imposed on the Gaza Strip, in addition to ensuring accountability for all suspected violations of international law perpetrated in the occupied Palestinian territory.