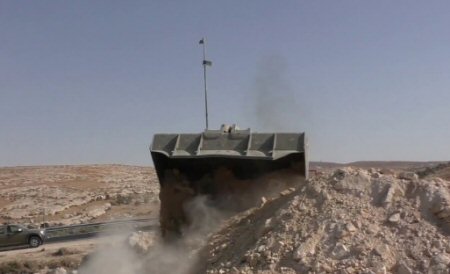 Israeli forces destroyed a recently-rehabilitated road that connected Khirbet Shaab al-Butum to Masafer Yatta, in the south of the West Bank, said a local activist.

Coordinator of the Anti-Wall and Anti-Settlement Committees in southern Hebron Rateb al-Jabour told WAFA that Israeli forces provided protection to a military bulldozer as it proceeded to destroy the road, which was used to facilitate Palestinian farmers’ access to their farmlands and residential areas.

He said the Israeli military act aims to displace Palestinians from the area to in order to build a settlement.

Khirbet Shaab al-Butum is among dozens of small communities located in the Masafer Yatta area, which rely heavily on animal husbandry as the main source of livelihood.

Masafer Yatta is classified as Area C, which is under full Israeli military control. Area C makes up around 60 percent of the area of the occupied West Bank, which Israel plans to annex after expelling its Palestinian population.

It has been designated as a closed Israeli military zone for training since the 1980s, and accordingly referred to as Firing Zone 918.

Israeli violations against the area include demolition of animal barns, homes and residential structures. Issuance of construction permits by Israel to local Palestinians in the area is non-existent.