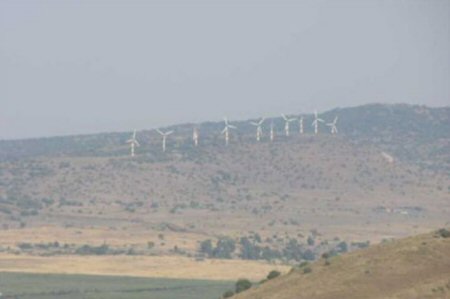 Al-Marsad has published a new legal report that investigates the implications of a recent Israeli project which proposes to develop a massive wind farm in the occupied Syrian Golan (‘Golan’). The report highlights the consequences of Israel’s latest attempt to tie itself to the Golan by stealing the region’s resources and manipulating its native population. Although the report focuses on one specific project, it identifies many of the common characteristics of settlement businesses, in the Golan, which violate international law and harm the native community immensely.

Windfall – The Exploitation of Wind Energy in the Occupied Syrian Golan investigates Energix Renewable Energies’ Clean Wind Energy Project. The project seeks to build at least 52 wind turbines across much of the limited remaining Syrian owned land in the Golan. Energix is an Israeli company and is working collectively with the Israeli government to advance the project. Energix has sought to execute the project through a number of concerning practices, including fraud and misrepresentations, and has possibly engaged in widespread corruption.

According to the PNN, the report starts by exploring Energix’s project and its actions in the native Syrian community. Next, the report discusses how Energix is violating numerous principles of corporate social responsibility in advancing the project. Lastly, the report shows how the project, like the majority of Israeli sponsored business development plans in the Golan, violates fundamental principles of international law. The report concludes by identifying how the project is simply a tool for Israel to tighten its illegal grip on the Golan to profit Israelis and Israeli settlements at the expense of the local Syrian community.

With no end in sight to the occupation, Al-Marsad seeks to uphold basic international laws and standards in the region. It therefore rejects and will continue to contest Energix’s and Israel’s actions in the Golan. Syrians must have the final say in what happens with Syrian natural resources on Syrian land.