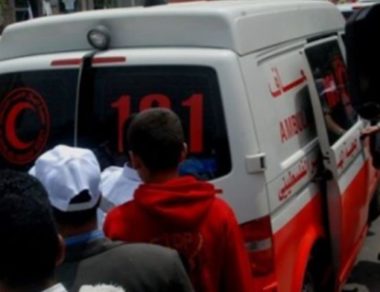 A Palestinian has teenager sustained multiple fractures in his legs after being assaulted by Israeli soldiers near Jenin city, in the northern West Bank, according to the Palestinian Red Crescent Society (PRCS).

PRC official, Mahmoud Saadi, told WAFA that 17-year-old Majdi Abu Ghali, from Jenin, was beaten severely, by Israeli soldiers, after he entered the site of the abandoned Israeli settlement of Ghanim, east of Jenin.

The teen was reportedly unaware of the Israeli soldiers who had raided the evacuated settlement, and was surprised by soldiers who shortly attacked and brutally beat him for no reason.

The teenager was moved to nearby Khalil Suleiman public hospital for medical treatment.

According to the indictment, on a day in early January, the soldiers punched, slapped, kicked and beat the two detainees, hitting them in their head, face, chest, legs and more.