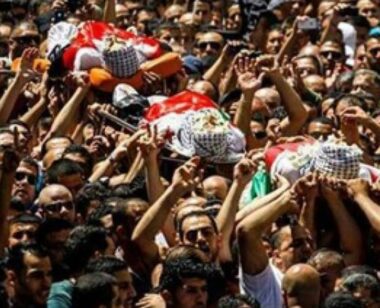 The Abdullah al-Hourani Center for Studies and Documentation” which is run by Palestine Liberation Organization (PLO), has reported, Sunday, that Israeli soldiers killed 27 Palestinians, including seven children and two women, in addition to wounding 1070 other, and abducted around 2330 Palestinians in the first half of this year, 2020.

The Center stated that the soldiers killed 17 Palestinians in the West Bank, including occupied Jerusalem, and ten in the Gaza Strip.

The Israeli army also abducted 2330 Palestinians in the West Bank, including Jerusalem, and the Gaza Strip, including those who were taken prisoner on the Erez (Beit Hanoun) crossing in northern Gaza. Among the abducted Palestinians are 304 children and 70 women.

It is worth mentioning that the detainees in Israeli prisons face harsh conditions, constant violations, including torture, collective punishment, and being deprived of basic rights guaranteed by International Law and all related treaties.

700 detainees have various illnesses and serious health conditions, including cancer, and are denied professional and adequate medical attention.

Israel is also holding captive a total of 4700 detainees, including 41 women, 160 children, and about 565 who are held under the arbitrary Administrative Detention orders without charges or trial.

Also, Israeli soldiers injured 1070 Palestinians, mainly during nonviolent protests against the illegal annexation of their lands, home demolitions, and the isolation of entire villages and towns.

Abdullah al-Hourani Center also said Israel prepared plans for the construction of thousands of colonialist units in the West Bank, including Jerusalem.

It added that Israel also demolished 357 Palestinian buildings, including 136 homes and 221 structures, and that %54 of these demolitions took place in Hebron and Jerusalem.